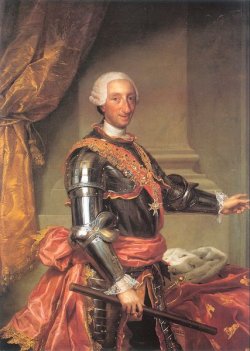 Charles was the first son of the second marriage of Philip V with Elizabeth Farnese of Parma.

In 1732, Charles became duke of Parma by right of his mother.

In 1734, Charles conquered the kingdom of the Two Sicilies. However, he had no military inclinations.

Just before the beginning of the War of the Austrian Succession, the British fleet in the Mediterranean threatened to bombard Naples if Charles did not promise to remain neutral during the approaching conflict. After this military intervention, Charles always kept a feeling of hostility to Great Britain.

As king of the Two Sicilies, Charles initiated several reforms that he later continued in Spain. Foreign ministers who dealt with him agreed that he had no great natural ability. However, Charles was honestly desirous to do his duty as king and he showed good judgement in his choice of ministers. The chief minister in Naples, Tanucci, had a considerable influence over him.

On the death of his half-brother Ferdinand VI, Charles became king of Spain as Charles III. However, he had to resign the Two Sicilies to his third son Ferdinand. As king of Spain his foreign policy was disastrous. His strong family feeling and his detestation of Great Britain, which was unchecked after the death of his wife, Maria Amelia, daughter of Frederick Augustus II of Saxony, led him into the Family Compact with France.

In 1762, Spain got actively involved in the last campaign of the Seven Years' War and lost important territories when the Treaty of Paris was signed.

In 1770, Charles III almost ran into another war over the barren Falkland Islands.

In 1779, Charles III joined France and the American insurgents against Great Britain, even though he knew that the independence of the British colonies must have a ruinous influence on his own American dominions. For his army he did practically nothing, and for his fleet very little except build fine ships without taking measures to train officers and men.

But his internal government was on the whole beneficial to the country. He began by compelling the people of Madrid to give up emptying their slops out of the windows, and when they objected he said they were like children who cried when their faces were washed. In 1766 his attempt to force the inhabitants of Madrid to adopt the French dress led to a riot during which he did not display much personal courage. For a long time after it he remained at Aranjuez, leaving the government in the hands of his minister Aranda. All his reforms were not of this formal kind. Charles was a thorough despot of the benevolent order, and had been deeply offended by the real or suspected share of the Jesuits in the riot of 1766. He therefore consented to the expulsion of the order, and was then the main advocate for its suppression. His quarrel with the Jesuits, and the recollection of some disputes with the pope he had had when king of Naples, turned him towards a general policy of restriction of the overgrown power of the church. The number of the idle clergy, and more particularly of the monastic orders, was reduced, and the Inquisition, though not abolished, was rendered torpid. In the meantime much antiquated legislation which tended to restrict trade and industry was abolished; roads, canals and drainage works were carried out. Many of his paternal ventures led to little more than waste of money, or the creation of hotbeds of jobbery. Yet on the whole the country prospered. The result was largely due to the king, who even when he was ill-advised did at least work steadily at his task of government. His example was not without effect on some at least of the nobles. In his domestic life Charles III was regular, and was a considerate master, though he had a somewhat caustic tongue and took a rather cynical view of mankind. He was passionately fond of hunting. During his later years he had some trouble with his eldest son and his daughter-in-law. If Charles had lived to see the beginning of the French Revolution he would probably have been frightened into reaction. As he died in 1788, he left the reputation of a philanthropic and "philosophic" king.