About 100 Cherokee villages formed a loose confederacy. The “Red Chief” (war chief) of each village chose the “War Woman,” who would accompany war parties. She decided which prisoners would live or die.

In 1540, the Spanish conquistador Hernando de Soto reached the territory of the Cherokee people.

From 1629, the Cherokee people had frequent contacts with English traders from Virginia and Carolina who were interested by the high quality deerskins produced by the Cherokee.

In the 1660s, the Cherokee people welcomed a band of Shawnee in their territory. This band had been driven south by the Iroquois.

From 1689, the Cherokee people generally sided with the British in their numerous wars against the French.

In 1692, the Shawnee raided a large Cherokee village.

Throughout the 18th century, the Cherokee and Creek were frequently raiding their respective territories.

In 1706, the Cherokee and the Iroquois made peace.

From 1710 and 1715, the Cherokee and their Chickasaw and British allies fought against the Shawnee and French, forcing the former to move northwards. In 1712 and 1713, the Cherokee, Yamassee, Catawba also fought the Tuscarora, who would later join the Iroquois Confederacy. In 1716 and 1717, the Cherokee fought the Yamasee.

In 1716, as British allies, the Cherokee received a large quantity of muskets and ammunition.

In 1721, the Cherokee ceded some lands to the British in South Carolina.

In 1730, Sir Alexander Cuming, a Scot adventurer, proclaimed Moytoy of Tellico as “Emperor of the Cherokee.” Moytoy recognized King George II of Great Britain as protector of his people. Cuming brought seven prominent Cherokee leaders to London, where they signed a treaty with the British.

In 1738 and 1739, smallpox epidemics broke out among the Cherokee., killing half their population.

In 1741, Amo-sgasite (Dreadful Water) tried to succeed his father Moytoy as “Emperor” but the Cherokee elected Conocotocko (Old Hop) as their leader.

In 1745, the Cherokee and Chickasaw drove the Shawnee north across the Ohio River.

In 1750, the Cherokee defeated the Choctaw, who were allied with the French.

In 1753, a conflict over hunting territories in northern Georgia broke out between the Cherokee and the Muskogee. In 1755, the Cherokee defeated the Muskogee at the Battle of Taliwa (near present-day Ball Ground, Georgia).

In 1771 and 1772, the Cherokee fought British settlers who squatted on Cherokee lands in Tennessee and Kentucky. In 1776, they attacked British settlements in South Carolina, Georgia, Virginia, and North Carolina but were defeated and some of them relocated on the banks of the Chickamauga Creek.

In 1805, the Cherokee ceded their lands between the Cumberland and Duck rivers to Tennessee.

In 1838, the Cherokee people were forcefully relocated west of the Mississippi.

At the outbreak of the Seven Years’ War, the Cherokee people were still allied with the British.

In 1759, a dispute arose between Cherokee warriors and Virginian frontiersmen about wild horses. The warriors were coming back from the Ohio River, where they had assisted the British during their expedition against Fort Duquesne. On their way, they had captured a few wild horses. The frontiersmen claimed the horses as their own and attacked the Cherokee war party, killing 12 men. When the news of this aggression became known in the Cherokee villages, some warriors under Chief Oconostota launched a series of raids against British settlements. Littleton, the governor of South Carolina assembled a force of 1,100 men army and invaded the lower Cherokee settlements, whose chiefs quickly agreed to peace and handed over two warriors accused of murder to Littleton. Furthermore, 29 Cherokee chiefs were taken hostages and kept at Fort Prince George .

In 1760, the Cherokee concluded an alliance with the French. In May, the British undertook an expedition against the Cherokee people. In August, Cherokee warriors managed to capture Fort Loudoun. A truce of six months was agreed to, during which peace attempts failed.

In 1761, the British launched a second expedition against the Cherokee people. In November, the Cherokee signed a peace treaty with Virginia. In December, they made peace with South Carolina. 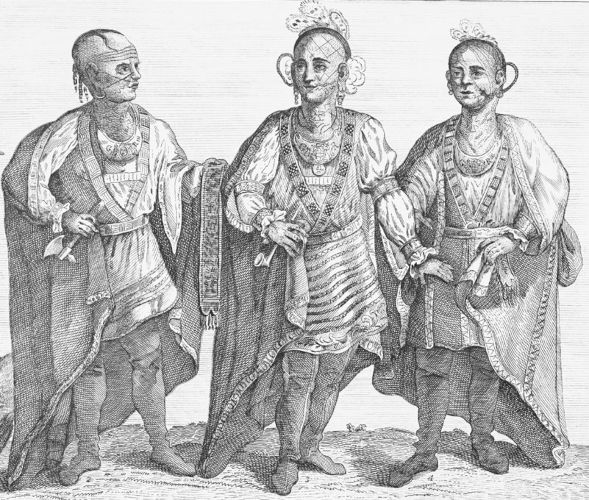 The bodies and faces of Cherokee men were heavily tattooed with geometric designs and their noses and ears were pieced with rings made up of wampum or silver.

Men usually shaved most of their hair, leaving only a tuft of hair in the centre. They wore a breechcloth (a leather belt with a rectangle of buckskin pulled under it, front and rear) and a European shirt, a large mantle, and deerskin leggings and mocassins (decorated with porcupine quills). The wealthier wore a collar of wampum, a silver gorget, and silver bracelets on their arms and wrists.

Bows and arrows with flint tips were the traditional weapons of Cherokee warriors. By mid XVIIIth century metal knives and hatchets were common, as well as tomahawks with iron blades.

By the 1680s, several Cherokee warriors had European firearms which had been traded with the English.