The Chickasaw people are an Muskogean-speaking group of Native Americans. They inhabited a region to present-day southwestern Kentucky, western Tennessee, northeastern Mississippi and northwestern Alabama.

In 1541, the Spanish conquistador Hernando de Soto reached the territory of the Chickasaw people. Relations were initially good until de Soto tried to requisition 200 men to carry baggage and executed two men. The Chickasaw retaliated by attacking the Spanish camp, inflicting some damage.

After the creation of the colony of Virginia in the 1670s, the Chickasaw people began to trade with the settlers. Armed with muskets traded with the British, they attacked the Choctaw people and sold captive as slaves to the British. However, the Choctaw also acquired muskets from the French and managed to resist to the incursions of the Chickasaw, putting an end to the slave raids.

Contrarily to most Native American peoples of the Lower Mississippi, the Chickasaw preferred to ally themselves with the British. During the 18th century, Chickasaw warriors often raided French merchants or soldiers, who were traveling between Nouvelles-Orléans and Canada. From 1721, they were openly at war with the French. In the 1730s, the French asked the Chickasaw people to expel Natchez families, who had taken refuge among them after the Natchez Revolt of 1729. The French even armed the Choctaw people to fight the Chickasaw. The latter then launched raids against French establishments and Choctaw villages, interrupting traffic on the Mississippi for some time.

In 1736, the Chickasaw drove back a French invasion of their territory, winning the engagements of Ogoula Tchetoka and Ackia. In 1741 and 1752, the French launched other unsuccessful expeditions against the Chickasaw people.

After the American War of Independence, the Chickasaw people allied themselves with the United States in their fight against the Shawnee people.

In April 1761, a party of 20 Chickasaw warriors accompanied Colonel James Grant in his 1761 - British expedition against the Cherokee people. At the end of April, this scouting party attacked the village of Keowee, killing Chief Tistoe's wife and wounding his son, before returning to “12 Mile Run” near Saluda. 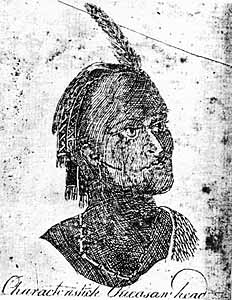 Sketch of a characteristic Chickasaw head circa 1775 – Source : Wikimedia Commons

The Chickasaw people was known to the French under the generic name of “Têtes-Plates” (Flatheads) because of their custom of flattening the head of male infants, a practice which they shared with several Native American peoples of the South-East. Chickasaw usually removed all body hair and made extensive use of tattooing. During peacetime, they wore their hair long.

Besides the characteristics illustrated in the accompanying sketch, showing a typical headdress, haircut and tattooed face, it seems that, in time of war, Chickasaw warriors shaved most of their hair, leaving only a scalplock. On the warpath, they painted the upper part of their body and their face in various patterns of blue and red.

Like most Native American peoples of eastern North-America, they probably dressed with:

Bows and arrows with flint tips were the traditional weapons of Chickasaw warriors. However, British traders soon recognized their warlike qualities and armed them with firearms. By mid XVIIIth century metal knives and hatchets were common, as well as tomahawks with iron blades.

N.B.: the section Role during the War is derived from our articles depicting the various campaigns, battles and sieges.