The Chuguev Fortress was located in the centre of Slobozhanshina or Sloboda land (a sloboda being a kind of settlement, bigger than a village but smaller than a town). In 1638, 865 cossacks appeared in this area and settled in the Chuguev Fortress until 1641, when due to internal strife they killed their ataman and returned back. The next settlers appeared in 1645 and since that time Chuguev was garrisoned by a cossack command, separated from other Slobodian Cossacks. [2,3]

Count Burkhard Christoph von Münnich, based on the experience of the Russo-Turkish War (1736-39), considered the Chuguev Cossacks as more reliable than irregular Cossack Hosts. By 1740, this command counted 102 cossacks and 56 Christianized Kalmyks. Münnich ordered to raise this command to the strength of a regiment and promoted its commander from major to colonel rank. By 1740, the regiment consisted of 377 men [1], more precisely:

No details about organization are known, and though the number of ranks suggests 3 increased sotnias, but Maslovskiy supposes that the regiment counted 3 sotnias of cossacks and 2 sotnias of Kalmyks.

The regiment was considered as more reliable than irregular Cossack Hosts.

In 1756, the regiment ( 5 sotnias) was initially stationed in Livonia and Courland.

For the campaign of 1757, the regiment fielded 3 sotnias (coys) of Cossacks and 2 sotnias of christened Kalmyks. On August 30, during the Russian campaign in East Prussia, these 5 sotnias took part in the Battle of Gross-Jägersdorf where they were deployed in the first line in Demiku's Brigade.

In January 1758, the regiment took part in the Russian invasion of East Prussia. On February 3, as part of Stoffeln's detachment, it marched to Marienburg (present-day Malbork) and other places on the Vistula under the command of Major Bulazell. On February 23, Stoffeln detached the regiment under Major Preradevilsch to Rastenburg. On August 10, during the invasion of Brandenburg, Major-general Stoffeln with the Chuguevski Cossacks and some hussars took possession of Soldin. On August 15 at 2:00 AM, 500 Cossacks of the regiment formed part of a force under Quartermaster-general Stoffeln who, according to Fermor's orders, marched to lay siege to Cüstrin. On August 25, the siege was lifted after the inconclusive Battle of Zorndorf. About mid November, the unit took its winter quarters in Freystadt as part of Resanov's 2nd Division.

On July 23 1759, the regiment took part in the Battle of Paltzig where it was attached to Krasnochekov's brigade deployed in the vanguard. The regiment was also present at the Battle of Kunersdorf where, at the end of the encounter, it nearly captured King Frederick II.

On June 30 1761, during the first Prussian raid in Greater Poland, the Prussian vanguard under Colonel Lossow attacked Russian Brigadier Löpen near Scmiegle (present-day Śmigiel). Löpen was at the head of 2 sqns of Tverskiy Dragoons along with Chuguevski Cossacks and more than 1,000 more cossacks. The Russians were defeated, losing 1 lieutenant-colonel, 3 sub-officers, 30 dragoons, 5 cossacks and 3 others. The Prussians lost only 19 men in this action. 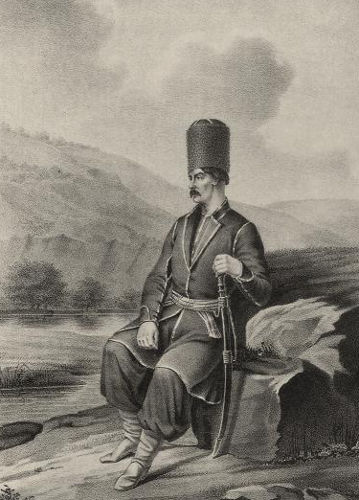 At the outbreak of the Seven Years' War, half the unit was dressed in blue caftans, half in red caftans. The rest of their “uniform” is very conjectural and based on the clothing of other Cossack units.

Waistcoats were often made of blue cloth. Their hair was cut in roundel. They wore a high bonnet of sheepskin. Coats of rank and file were girdled with an ordinary sabre strap or a belt of coarse fabric material. Leaders wore silken belt from Persia or Poland over the sabre belt. Sabre was worn over the waistcoat. Some cossacks, especially the rank and file had only a mustache, beard was less common. They wore woollen trousers, half boots of black Morocco leather or simple leather. The Cossacks trousers were similar to the Turkish ones, but much tighter.

Troopers were usually armed with a lance, a sabre and a pistol. They could also carry a knife and a musket.

Kettle-drummers are mentioned for this Cossack units.

Konstam A. & B. Younghusband: Russian Army of the Seven Years War, Osprey, London, 1996

Roman Shlygin for the section "Origin and History" of this article