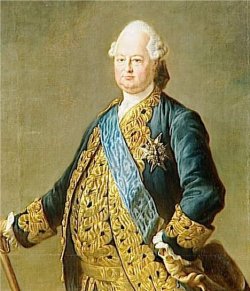 Contemporary painting of Louis de Bourbon-Condé by an unknown painter

As the youngest son of the family, Louis was destined to a religious career and entered in religion.

In 1729, Louis founded the Académie du Petit-Luxembourg in the hostel of the same name. This academy was the meeting point of many scientists and artists.

In 1733, Louis received a special authorisation from Pope Clement XII to undertake a military career. During the War of the Polish Succession, in 1735, Louis de Bourbon-Condé was promoted lieutenant-general and took part in the campaign in the Netherlands.

In 1736, Louis became Abbot of Chaalis and undertook important works, ruining the finance of the abbey and forcing the monks to disperse.

During the War of the Austrian Succession, Louis fought bravely at the Battle of Dettingen on June 27, 1743. The same year, he succeeded to the Duc d'Antin at the head of the French Freemasonry.

Clermont became a great friend of Madame de Pompadour and carried her cockade when preparing for combat. In 1753, Clermont became member of the Académie française.

"The character is curious to know: prince of blood, abbot, military, libertine, connoisseur of arts or at least academician, part of the opposition at the Parliament, devout in his late years, he is one of the most striking specimens, the most amusing on certain days, also the most shocking (though with nothing odious) of the abuse... under the regime of good pleasure and privilege".

During the Seven Years' War, due to the influence of Madame de Pompadour, Clermont assumed command of the French army of the Rhine in 1758. On February 14, Louis de Bourbon-Condé Count of Clermont-en-Argonne arrived at Hanover to supersede the Maréchal de Richelieu as commander of the French Army. Richelieu was gone since a week and Clermont had to command with no help from the man he was relieving... Everything was in such a bad condition that Clermont supposedly wrote to Louis XV:

"I found your Majesty's Army divided into 3 parts. The part which is above the ground is composed of pillagers and marauders, the second part is underground, and the third is in hospital. Should I retire with the first or wait until I join one of the others?"

The Allies soon launched a winter offensive in western Germany and drove Clermont's Army back to the Rhine. At the beginning of June, the Allies successfully undertook the passage of the Rhine and forced Clermont back to Rheinberg, then to Neuss. On June 23, Clermont was defeated in the Battle of Krefeld by Ferdinand of Brunswick. After this battle, Clermont was immediately dismissed and replaced by the Marquis de Contades.

After the war, Clermont took part in the reorganisation of the French Army.

In 1765, Clermont secretly married Miss Elisabeth-Claire Leduc, a dancer of the Opéra with whom he lived at the Castle of Berny near Fresnes. They had two children.