N.B.: the regiment was often referred to as “Clermont Prince” to distinguish it from the Clermont-Tonnerre Cavalerie.

When the French Cavalry was reorganised on December 1 1761, the regiment ranked 28th.

In 1756, at the outbreak of the war, the regiment was still stationed at Chaumont.

By August 1 1757, the regiment had joined the French army in Germany. At the end of the year, it took its winter quarters in the second line at Wunsdorf and Baringshausen.

By May 23 1760, the regiment was part of the left reserve of the first line of Duc de Broglie's Army, placed under the command of Saint-Germain. On July 10, the regiment probably took part in the Combat of Corbach. 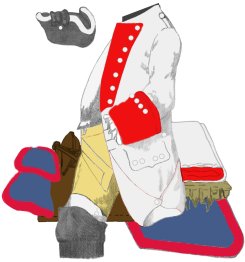