During the War of the Polish Succession, the regiment served on the Rhine 1733 to 1735.

During the Seven Years' War, the regiment ranked 97th and was under the command of:

In 1757, the regiment joined the Lower Rhine Army commanded by Maréchal d'Estrées. At the end of June, it was at the camp of Bielefeld with d'Estrées' main corps. On July 26, the regiment was at the battle of Hastenbeck where it was part of the right wing under d'Armentières. On August 16, the regiment was among the force sent by the Duc de Richelieu to occupy the Duchy of Brunswick who had submitted to the French domination. At the end of the year, it took its winter quarters in the second line of the French Army in the town of Hannover.

In February 1758, when Ferdinand of Brunswick launched his offensive, the regiment retired on the Rhine with the rest of the French army. From March 30 to April 4, it was in the first line of Clermont's army in the camp of Wesel on the Lower Rhine. In April, when Clermont redeployed his army along the Rhine, the regiment was stationed at Apeltorn and Marienbaum near Xanten. After the successful crossing of the Rhine by Ferdinand's army on May 31, it did not join Clermont's army at Rheinberg but was rather deployed at an unspecified location. On August 5, its two grenadier companies were detached from Cologne to form part of Chavigny's advanced guard and participated to the combat of Mehr where they were engaged in the fighting inside the village. 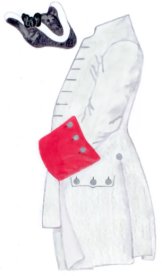