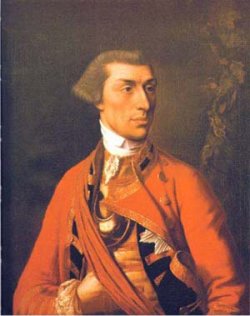 Coote was the son of a clergyman.

In 1745, Coote saw active service during the Jacobite Rising.

In 1746, after the Battle of Falkirk fought on January 17, Coote was court-martialled for cowardice but was exonerated of the charge. However, he was found guilty of misbehavior for going to Edinburgh with the colours which he had carried at Falkirk. Consequently, he was cashiered from the army.

In 1749, Coote rejoined the army as lieutenant in the 37th Regiment of Foot which then served in Minorca.

In 1755, Coote obtained a captaincy in the 39th Regiment of Foot. This regiment was then sent to India.

In 1756 a part of the 39th Regiment of Foot, then quartered at Madras, was sent forward to join Major-General Clive in his operations against Calcutta, which was reoccupied without difficulty. Coote was soon given the local rank of major for his good conduct in the surprise attack of the Nawab's camp.

On January 2 1757, Coote had a dispute with Clive about the command of Fort William at Calcutta. This incident gave rise to Clive's dislike of Coote. On June 23, during the council of war that preceded the Battle of Plassey, Coote strongly supported an offensive action. After the defeat of the Nawab, he led a detachment in pursuit of the French for more than 600 km under extraordinary difficulties.

After Coote's return to Great Britain, his conduct won him the rank of lieutenant-colonel.

On January 10 1759, Coote was allowed to raise the 84th Regiment of Foot. This regiment was then sent to India where it arrived in October to take part in the decisive struggle between French and British in the Carnatic. Coote took command of all British troops in India. Clive was furious when he heard about it.

On January 22 1760, Coote led the British forces at Madras in the decisive victory of Wandewash against the French. After a time the remnants of Lally's forces were shut up in Pondicherry. For some reason Coote was not entrusted with the siege operations, but he cheerfully and loyally supported Monson.

On January 15 1761, Monson brought the Siege of Pondicherry to a successful end. Soon afterwards Coote was given the command of the East India Company's forces in Bengal, and conducted the settlement of a serious dispute between the Nawab Mir Cassim and a powerful subordinate.

In 1762, Coote returned to Great Britain. On his way, he got married at Saint-Helena with the daughter of the Governor of the island. In Great Britain, Coote received a jewelled sword of honour from the Company and other rewards for his great services.

In 1770, Coote was made a K. B. He returned to India but quarreled with the Madras Council and left after six months.

In January 1779, Coote returned to India as lieutenant-general commanding in chief. Following generally the policy of Warren Hastings, he nevertheless refused to take sides in the quarrels of the council, and made a firm stand in all matters affecting the forces.

In 1780, the Maratha Prince Hyder Ali's progress in Carnatic called Coote again into the field.

On June 1 1781, Coote decisively defeated the forces of Hyder Ali at Porto Novo. He won this battle despite the most unfavourable conditions against odds of five to one. On August 27, this battle was followed up by another hard-fought one at Pollilur. A month later, the Mysore troops were routed at Sholingarh.

In 1782, Coote took part in an arduous campaign where he won another victory against Hyder Ali at Arni. This campaign finally shattered his health.