The unit was initially raised in Spain on February 27 1566 by don Pedro de Padilla. It counted 5 companies. It was soon sent to the kingdom of Naples.

In 1580, the tercio took part to the occupation of Portugal.

In 1588, 10 companies of the tercio served aboard the Invincible Armada.

In 1614, a detachment of the tercio took part to the landing at Oneglia in Italy and to the captures of Monbaldone, Dente, Rocaberedo and Cortemiglia. In 1615, it defended the town of Bistagno. In 1617, it was at the siege of Vercelli.

From 1625 to 1630, the tercio served in Italy against the French and Piemonteses.

In 1678, the tercio garrisoned Milan.

On August 18 1690, the tercio fought at the battle of Staffarda where it suffered heavy losses. In 1691, it defended Carmagnola. In 1692, the unit counted only 300 men, it joined the army who invaded Dauphiné and took part to the capture of Embrun (August 19). It then campaigned in Italy until 1696.

In 1700, the tercio garrisoned Cremona.

At the beginning of the War of the Spanish Succession, the unit sided for the Bourbon. On August 31, it joined the brigade of Lombardia and attacked the Austrian entrenchments at Chiavi. In 1702, it garrisoned the castle of Tortona and took part to the battle of Luzara (August 15). In 1704, it was at the sieges of Vercelli and Ivrea. In 1705, the tercio was transformed into a regiment and renamed Corona. It served in the Torralba division in Vendome's army. In 1707, it vainly defended the city of Milan against an Austrian attack and retired to Spain where it served at Pamplona and Valencia. In 1708, it played an active part in the reconquest of Tortosa. In 1710, it was at the battle of Zaragosa (August 20) and retreated to Castile. In 1714, it took part to the pacification of Catalonia and then garrisoned Cadiz.

In 1717, the second battalion took part to the naval expedition which tried to reinstate James II as the king of England.

On February 10 1718, the unit officially became the Corona regiment.

In 1720, the regiment took part to an expedition in Morocco to defend Ceuta.

At the beginning of the War of the Polish Succession, the regiment embarked for Italy in 1733 where it served under the duke de Montemar and fought at the battle of Bitonto (May 25) and took part to the blockade of Capua. In 1735, it was at the capture of Messina in Sicilai.

In 1740, the regiment was transferred from Sicilia to the island of Majorca.

At the beginning of the War of the Austrian Succession, the regiment was sent to Italy in 1742. In 1743, it fought at the battle of Camposanto (February 8). In 1745, it took part to the sieges of Tortona and Pavia and fought at the battle of the Tanaro (September 27). In 1746, it took part to the battlee of Piacenza (June 16). It followed the Franco-Spanish army when it retired towards Nice.

In 1749, the regiment remained in Naples until peace was secured. It then returned to Spain where it was assigned to garrison duty.

During the Seven Years' War, the regiment ranked 6th and was under the command of:

In 1756, the regiment garrisoned Ceuta on the North African coast.

In 1761, the regiment returned to Spain, went across Catalonia, reached Andalusia and entered into Cádiz.

In 1762, when war broke out with Portugal, the regiment was ordered to move towards the province of Extremadura bordering Portugal. During the campaign, it covered the places of Alcántara and Albuquerque. 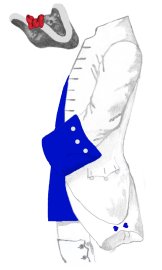 The coronela (colonel flag) of the regiment was white with a red Burgundian cross terminated in each corner by a medallion carrying the arms of the regiment (two crossed black anchors on a blue field surmounted by a golden crown) surmounted by a golden crown. In the middle: the arms of Charles III surrounded by the necklace of the order of the Toison de Oro (Golden Fleece).