The regiment was created as per a commission dated March 1, 1674, at the moment when a Dutch fleet threatened the coasts of Guyenne. It was raised at Bayonne by the Maréchal d’Albret. The unit would remain a gentleman’s regiment until 1762, being known by the names of its successive colonels.

In 1674, during the Franco-Dutch War (1672-78), the regiment initially garrisoned Bayonne. In 1675, it was transferred to Thionville on the border with Germany. In 1678, it was sent to Freiburg and took part in the attack of the entrenchments of the Kinzig, in the combat of Offembourg and in the failed attempt to capture Strasbourg.

In 1690, during the Nine Years' War (1688-97), the regiment, under the name of Clérambaut, took part in the capture of Cahours, Barges and Suze, and in the Battle of Staffarda; in 1691, in the sieges of Suze, Villefranche, Montalban, Nice, Veillane, Carmagnola and Montmélian; in 1692, in the relief of Pinerolo and Susa; in 1693, in the Battle of Marsaglia and in the resupplying of Casale. In 1694 and 1695, the regiment garrisoned Pinerolo. In 1697, it campaigned on the Rhine. The same year, it took the name of Mirabeau.

In 1719, the regiment was employed in the Pyrenees, forming part of the Reserve.

In 1733, at the outbreak of the War of the Polish Succession (1733-35), the regiment served on the Rhine, taking part in the siege of Kehl. In 1734, it took part in the attack of the Lines of Ettlingen and in the siege of Philisbourg. In 1735, it fought in the Combat of Klausen.

In 1742, during the War of the Austrian Succession (1740-48), the regiment initially served in Bavaria where it took part in the capture of Elnbogen and Kaaden. In 1743, it participated in the defence of Dingolfingen; in 1744, in the combats of Saverne and Augenheim, in the siege of Freiburg; in 1746, in the sieges of Mons, Charleroi and Namur; in 1747, in the Battle of Lauffeld; and in 1748, in the covering of the siege of Maastricht.

In 1748, when it returned to Franche, the regiment was reduced to a single battalion. However, On March 10, 1749, it was brought back to two battalions by the incorporation of the disbanded Vivarais Infanterie.

In December 1762, when the French Army was reorganised, the regiment took the name of the Province of Vivarais and was transferred to the service of ports and colonies.

In 1757, the regiment was considered as cheerful, noisy but otherwise well behaved. Somewhere between August 23 and September 6, it joined the Army of Saxony, led by Soubise, in the area of Erfurt and Eisenach. On September 27, it was brigaded with the Castellas and La Viefville Saint-Chamond regiments under prince Camille in the second line of the left wing of the Franco-Imperial Army. On November 5, the regiment fought in the Battle of Rossbach where it formed a brigade along with La Viefville Saint-Chamond Infanterie under M. de Custine. Their brigade supported the left flank of Piémont Infanterie in the first line. The regiment was badly mauled and its colonel and Lieutenant-Colonel de Mauclair were wounded and taken prisoners; Battalion Commandant Baudeau and Major Dormand were wounded; Captain Bonal and Lieutenants Monteil and Sénaut, killed; Aide-Major de Pagny, Captains La Valette, Caulmont, Desplan, Le Blanc; Vernon, Bachelier, Cartelet, Saint-Maurice, Papus, Maisonade, Paussot and 8 lieutenants wounded and captured. At the end of the year, the regiment took up its winter quarters in Cleve on the Lower Rhine, in the fourth line of the French Army. The decimated regiment was later sent back to France.

In 1758, unable to continue its service in Germany, the regiment was sent to the coasts of Bretagne. On September 11, it took part in the Combat of Saint Cast.

In April 1761, the regiment returned to Germany where it was brigaded with La Dauphine Infanterie and took part in the campaign of that year

In 1762, the regiment, still brigaded with La Dauphine Infanterie, served in Germany where it was at the bombardment of Ham. It then returned to France where it was stationed at Rennes, Dinan and Saint Servain. 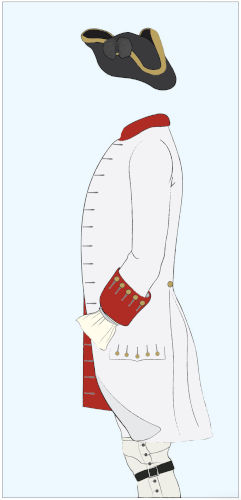 Menguy, Patrice: Les Sujets du Bien Aimé (an interesting websites which seems unfortunately to have disappeared from the web)