This Swiss regiment of 12 companies was raised on February 6, 1690 by Jean-Etienne de Courten, formerly captain in the Gardes Suisses in the Canton of Valais. It has always been exclusively formed of soldiers from this canton.

On 18 January 1698, the regiment incorporated part of the men of the disbanded Monnin Infanterie. It now counted three battalions.

In 1715, the regiment was reduced to two battalions.

In 1733, the regiment was increased to four battalions for the War of the Polish Succession (1733-35). It initially remained on the left bank of the Rhine. In 1734, it contributed to the capture of Trier and Trarbach. In 1735, its grenadiers were at the combat of Klausen. The regiment then occupied the positions of Phalz and Kick.

On January 8, 1737, the regiment was reduced to two battalions. It was stationed at Givet.

During the first campaigns of the War of the Austrian Succession (1740-48), the regiment remained in garrison at Douai. In September 1743, a third battalion was raised and stationed at Le Quesnoy. In 1744, the entire regiment campaigned under the Maréchal de Saxe and took part in the attack of La Gardette. In 1745, the regiment took part in the siege of Tournai, in the Battle of Fontenoy, and in the capture of Oudenarde, Termonde, Ostend and Nieuport; in 1746, in the reduction of the citadel of Antwerp and in the Battle of Rocoux; and in 1747, in the Battle of Lauffeld and in the sieges of Berg-op-Zoom, Fort Frédérik and Fort de Lillo. In 1748, the regiment was placed in garrison in Berg-op-Zoom. It was then transferred to Limbourg where it remained until February 1749.

On April 1, 1756, the regiment was reduced to two battalions. It had prévôté (provostship).

During the Seven Years' War, the regiment ranked 91st and was under the command of:

In 1756, the regiment was selected to form part of the French corps under the Prince de Soubise that Louis XV intended to send to assist the Austrian Army.

By August 1, 1757, the regiment was in Germany with the Army of the Lower-Rhine. It took part in the invasion of Hanover under the Duc de Richelieu.

In January 1758, the regiment was sent by Richelieu to reinforce the Duc de Broglie who was besieging Bremen. On January 16, the regiment took up its winter-quarters in Germany in the first line of the French army at Verden on the Aller River. On February 20, when Ferdinand of Brunswick launched the Allied winter offensive in Western Germany, the regiment retired from Verden to the Rhine with the rest of the French army. From March 30 to April 4, it was in the second line of Clermont's Army in the camp of Wesel on the Lower Rhine. In April, when Clermont redeployed his army along the Rhine, the regiment was stationed at Willich near Krefeld. On May 31, when Ferdinand successfully crossed the Rhine with his army and undertook a campaign on the west bank of the Rhine, the regiment had already left the Lower Rhine theatre of operation and was on its way to Hesse to reinforce Soubise's Army. By July, it had joined this army assembling near Friedberg in Hesse. On October 10, it was present at the Battle of Lutterberg where it was placed in the centre of the first line.

By May 23 1760, the regiment was part of the Reserve of the second line of Broglie's Army, placed under the command of M. d'Auvet. On June 15, Saint-Germain had assembled the Army of the Lower Rhine near Düsseldorf, the regiment was part of d'Auvet's Division who was sent to the right bank of the Rhine along with his 2 artillery brigades and 15 pontoons. On July 31, the regiment took part in the Battle of Warburg where it was deployed in the first line of the left wing. By December 30, the regiment had taken up its winter-quarters in Lichtenau.

By February 9, 1761, the regiment was part of Rougé’s Division stationed in the area of Marburg. By April 15, it was in the region of Friedberg, Butzbach and Assenheim under M. de Gantès.

By March 1762, the regiment was attached to the army of the Upper-Rhine. By July 12, it was at Kassel. On November 20, it was instructed to return to France.

In 1763, the regiment initially garrisoned Longwy before being transferred to Saarlouis in December. 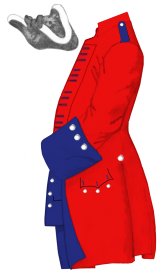 Drummers wore a blue livery. The blue drum barrel was decorated with large yellow fleurs de lys and with the royal arms of France and Navarre.

N.B.: the section Service during the War is mostly derived from our articles depicting the various campaigns, battles and sieges