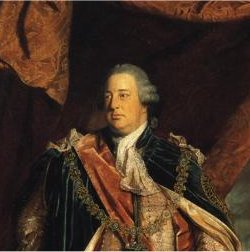 Detail of a painting of Prince William Augustus, Duke of Cumberland by Joshua Reynolds (1758)

William Augustus was the third son of George II and Caroline of Ansbach.

In 1726, William Augustus was created Duke of Cumberland. He received a good education and was intended by the king for the office of lord high admiral.

In 1740, Cumberland sailed as a volunteer in the fleet under the command of Sir John Norris. However, he soon became dissatisfied with the navy.

Early in 1742, Cumberland began a military career. In December, he became major-general.

In 1743, Cumberland first saw active service in Germany. On June 27, he took part with the king to the victorious Battle of Dettingen where he was wounded. After the battle, he was promoted lieutenant-general.

Cumberland was later promoted captain-general of the British land forces at home and in the field.

In 1745, Cumberland returned to Flanders as commander-in-chief of the Allied army consisting of British, Hanoverian, Austrian and Dutch troops. On May 11, while trying to relieve Tournai, besieged by the Maréchal de Saxe, Cumberland was defeated at Fontenoy. During this battle, he personally led a British column which penetrated the French centre but was finally repulsed. He then coolly conducted an orderly retreat. Later during the year, Cumberland was recalled from Flanders to serve under Ligonier in the British force sent against Prince Charles Edward Stuart who had invaded northern England. As the British advanced, the rebels retreated from Derby. Cumberland followed up till he reached Penrith. However, his vanguard was repulsed on Clifton Moor. After the capture of Carlisle, Cumberland retired to London.

In 1746, after the defeat of Hawley at Falkirk, Cumberland was appointed commander of the British forces in Scotland. On January 30, he arrived in Edinburgh. He then advanced on Aberdeen where he spent some time training his force to withstand the typical Highlanders charge. On April 8, Cumberland set out from Aberdeen towards Inverness. On April 16, he fought and won the decisive Battle of Culloden. At the end of the battle, he ordered his troops to give no quarter. During the ensuing pursuit, his troops completely destroyed the forces of the Young Pretender. Cumberland remained in Scotland for another three months, slaughtering the rebels and bringing the upheaval to an end. Cumberland was later nicknamed the "Butcher" for his behaviour at Culloden. He took no part in the campaign in Flanders that year.

In 1747, Cumberland was back to Flanders at the head of the Allied Army. On July 2, he was once more heavily defeated by the Maréchal de Saxe at Lauffeld.

During the ten years of peace, Cumberland returned to his role as captain-general of the British Army which he left totally unprepared for the upcoming war.

In 1757, the war broke out. Being offered to command the Allied Army in Hanover, Cumberland required the dismissal of William Pitt as a condition to accept this assignment. Pitt's government fell in April. Cumberland then assumed command in Germany where he tried to put a stop to the French invasion of Hanover. On July 26, he was defeated by the French in the Battle of Hastenbeck, near Hameln. On September 8, after a long retreat towards the sea, he finally capitulated at Klosterzenen. The terms of capitulation specified that he would disband his army and evacuate Hanover. When he returned to Great Britain, his disgrace was complete. George II refused to be bound by the terms of the capitulation of Klosterzeven. Cumberland resigned his public offices and retired into private life, first at Windsor then in London.

A Web of English History