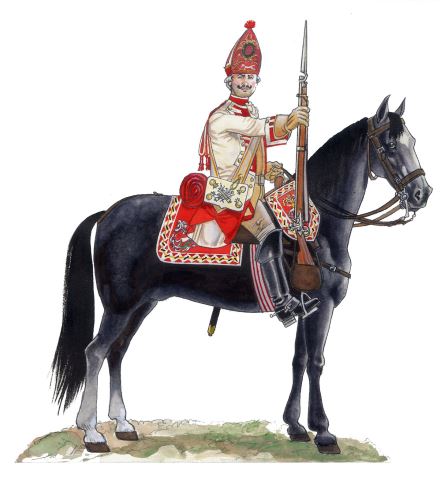 In 1670, Duke Georg Wilhelm of Celle acquired a regiment of four companies which had been initially established by Lieutenant-Colonel Franke for the Electorate of Cologne. It had been enlisted in the region of Liège and was made up of poor Walloons mounting Polish horses. In 1671, the regiment formed part of the force which captured the city of Braunschweig. In 1673, it served against the French on the Rhine.

In 1679, two companies of the regiment were disbanded.

In 1683, the regiment was re-established at four companies. In 1684, two additional companies were recruited.

In 1685, during the Great Turkish War, the regiment was sent to assist the Imperial army operating in Hungary and took part in the siege of Neuheusel and in the Battle of Gran. In 1687, two companies were disbanded.

In 1686, the regiment was posted on the Elbe to guard Hamburg against Danish entreprises.

In 1688, during the Nine Years’ War (1688-1697), part of the regiment was sent to the Netherlands to assist Prince William of Orange but was soon recalled to Hanover to protect Holstein-Gottorp against Danish entreprises. In 1690, the regiment marched to Brabant and fought in the sanguinary Battle of Fleurus. In 1691, it took part in the Battle of Leuze; in 1692, in the Battle of Steenkerque; in 1693, in the Battle of Landen; in 1695, in the sieges of Huy and Namur.

In 1701, at the outbreak of the War of the Spanish Succession (1701-13), the regiment was re-established at six companies. In 1702, it took part in the invasion of the Duchy of Brunswick-Wolfenbüttel; in 1703, it the engagement of Gimmig and in 1704, in the Battle of Blenheim]]. In 1705, at the death of Duke Georg Wilhelm of Celle, the regiment was incorporated into the Hanoverian Army. In 1708, it fought in the Battle of Oudenarde; and in 1709, in the Battle of Malplaquet. In 1710, the regiment returned to Hanover. In 1711, 400 men of the regiment under Major von Müller advanced in the Bishopric of Hildesheim and occupied Marienberg, Wiedelah and Steinbrück.

During the Seven Years' War, the successive regimental inhabers were:

On July 26 1757, during the French invasion of Hanover, the regiment took part in the Battle of Hastenbeck where two squadrons fought in the second line of the right wing. In addition to the force already mentioned, two squadrons of the regiment began the battle posted near the Afferde watchtower not far from Hameln. These four squadrons were not really tested in battle. They were superbly mounted, but drilled in the old German style tactics which meant that they were steady, but slow. They would have charged at a trot and quite likely would have received an enemy charge at the halt, trusting their firearms.

On May 26 1758, the regiment was with Ferdinand's main force in the camp of Nottuln. On May 31, it accompanied Ferdinand in his offensive on the west bank of the Rhine. On June 12, during the aborted attack on the French positions at Rheinberg, the regiment was in Spörcken's (second) column of attack. On June 23, the regiment took part in the Battle of Krefeld where it was deployed on the left wing under the command of Lieutenant-General von Spörcken. In December, when the Allied army took its winter quarters in Westphalia, the regiment was quartered in the Bishopric of Hildesheim.

In March 1759, the regiment formed part of the corps of the Hereditary Prince of Brunswick who entered into Hesse, driving back the French back to Königshofen and capturing more than 2,000 prisoners. On April 6, this corps effected a junction with the main Allied army under Ferdinand of Brunswick. The regiment then formed part of Schulenburg's Brigade in the first line of the cavalry left wing. On April 13, it fought in the Battle of Bergen where it formed part of the vanguard of the second column under the Prince von Ysenburg, covering the flank of the attempted Hanoverian infantry advances into Bergen. In this battle, the regiment lost Lieutenant von Blüchert who was wounded. In June, the regiment was part of Imhoff's Corps operating in Hesse. On August 1, 130 men of the regiment were part of the centre of the Corps of the Hereditary Prince who attacked and defeated Brissac's French Corps in the engagement of Gohfeld. This detachment was attacked by 500 foot but it drove them back. The regiment was then attached to Imhoff’s Corps posted at Appelhülsen to cover the siege of Münster.

On February 13, 1761, the regiment took part in the attack against Marburg where his chief, Major-General von Breitenbach, and Captain von Bülow were killed. On February 18, along with Müller Dragoons, the regiment fought against the French corps of General de Maupéou near Sachsenberg, taking several prisoners including Maupéou himself. In October, the regiment, as part of Wangenheim’s Corps, marched to the region of Hildesheim to support the relief of Braunschweig, followed the enemy and was at the cannonade in front of Einbeck.

On June 24 1762, the regiment fought in the Battle of Wilhelmsthal as part of the cavalry corps. A few weeks later, om July 23, it took part in the second combat of Lutterberg where it captured two standards and 12 cannon. The regiment was then attached to Walthausen’s Corps who, on July 31, drove back the enemy from Carlshaven. This corps then effected a junction with the corps of Prince Friedrich von Braunschweig near Hof-Geissmar. Together, they marched on Wanfried. On August 7, they dislodged the enemy from Eschwege. On August 18, they laid siege to Kassel. On August 23, the regiment was detached from this corps and joined the main army near Wetter. 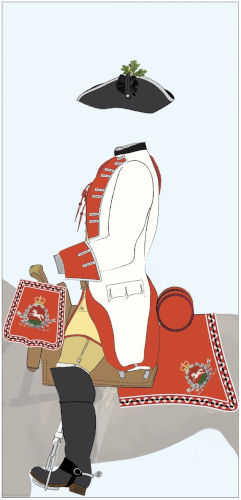 Officers wore a yellow silken sash across the right shoulder; a silver gorget, a silver porte-epee; silver lace on the tricorne. They did not carry a bandoleer.

NCO had silver laces on the cuffs, pockets, lapels and waistcoat. They did not carry a bandoleer.

Musicians were dressed in reverse colours and probably wore shoulder laces. The staff kettle-drummer probably carried NCO distinctives. His kettle-drums were made of copper and had a crimson apron fringed silver carrying the Springing White Horse on a red ground within the Garter supported by the Lion and the Unicorn; the motto “NEC ASPERA TERRENT” underneath.

As dragoons, musicians were drummers. The likely drum pattern would have been similar to the foot with hoops in alternating facing color and white diagonal stripes, white drum cords over a brass drum with the Arms of Hanover in the centre.

The first squadron carried the Leibstandarte while the 3 remaining squadrons carried an Eskadronstandartewhich varied from one squadron to the other. 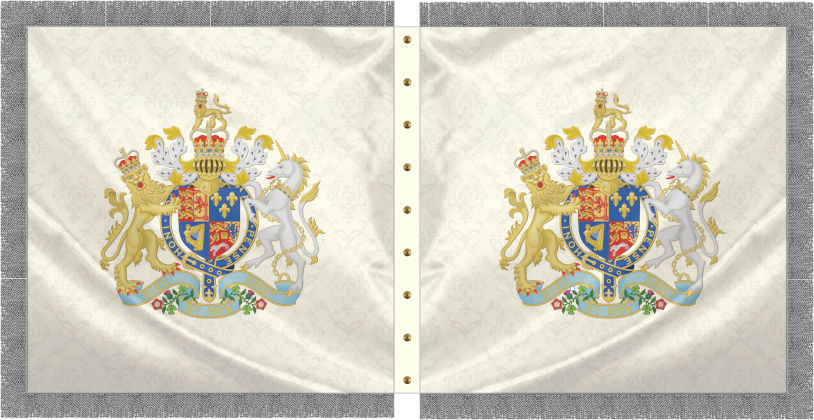 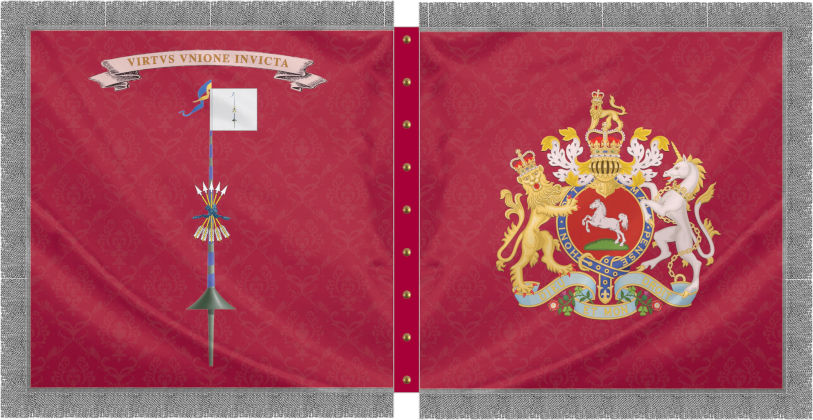 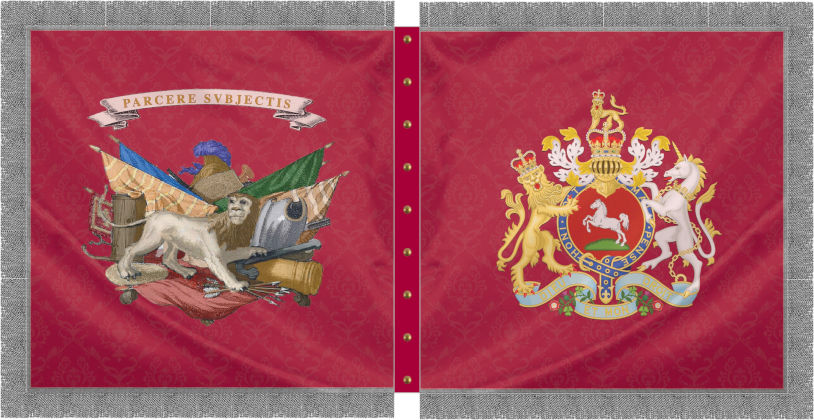 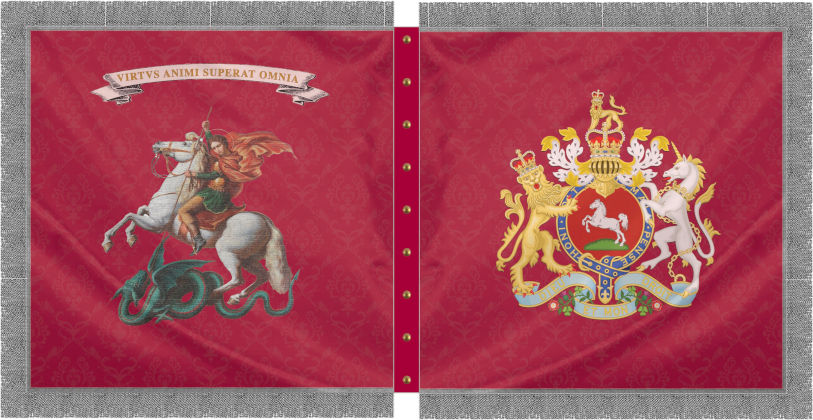