It descended from the Dalafänikan raised in 1542 and the Storeregemente from Upplands, Dalarna and Västmanlands. The regiment was initially raised in 1617 as the Upplands Storeregement, one of the nine Grand Regiment organised by Gustavus Adolphus.

In 1621, the Dalarna unit was one of the first to make use of the allotment system that would become common in the Swedish army at the end of the century.

In 1626, this Grand Regiment was permanently split into three smaller regiments (Upplands, Dalarna and Västmanlands) and a cavalry regiment (Upplands).

On December 5 1682, the Grand Regiment was finally broken down into three distinct and independent regiments, giving birth to the Dalarnas Infantry regiment.

During the Great Northern War, the regiment initially served in Zeeland against Denmark but was soon transferred to the Baltic region where it took part in the Battle of Narva (November 30 1700). In 1701, it served in Livonia. In 1702, the regiment joined the Swedish Main Army at Warsaw and fought at Kliszów (July 19). It then returned to the Baltic region where it served from 1702 to 1705. In 1708, it was present at the battles of Holowczyn (July 14) and Malatitze (August 31). In 1709, the regiment surrendered after the Battle of Polatava fought on July 8. In 1710, the regiment was reformed with new recruits in Sweden. Stockholm garrison with one battalion, then transferred to Rügen in 1712 and then in Pomerania with Stenbock. Fought at Gadebusch (December 9, 1712). In 1713, the regiment surrendered at Tönningen. It was reformed once more in 1715 in Roslagen and in 1716 and 1718 it took part in the expeditions against Norway.

At the beginning of the Seven Years' War, the regiment consisted of 1,200 privates in 2 battalions of 4 companies. Each company had 150 privates and 11 officers, NCOs and musicians.

In 1758, 2 companies of the other battalion (about 200 men) were also sent as reinforcement to Pomerania. On November 18, a detachment of the regiment was part of General von Lingen's force at the combat of Güstow.

The regiment remained in Pomerania until 1761. 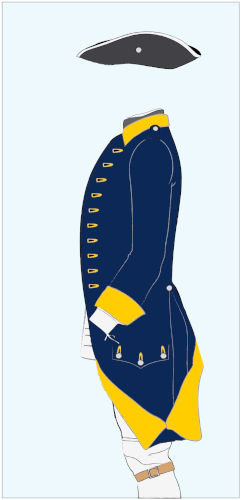 The uniform of the drummers were identical to those of the privates but white laces decorated the collar, seems, edges and pockets of the coat.

The drum was brass with provincial coats of arms embossed on the front. The rims were blue with yellow edging.