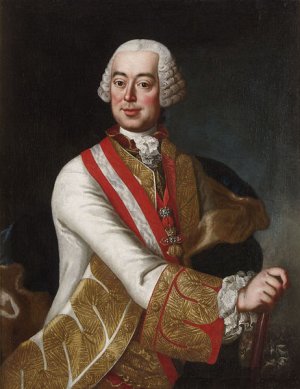 Leopold Josef Daun was the son and grandson of militarymen. Even though he was initially intended for the church, his interest in military matters proved irresistible.

In 1718, Daun served in the campaign in Sicily, in his father's regiment.

In 1734, Daun had already risen to the rank of colonel. During the War of the Polish Succession, he took part to the campaigns in Italy and on the Rhine.

From 1737 to 1739, Daun continued to add to his distinctions at the battle of Krotzka (July 22, 1739) during the war against the Turks. During this conflict, he was promoted to the rank of a General Feldwachtmeister (major-general).

From 1740 to 1742, during the first phase of the War of the Austrian Succession, Daun distinguished himself by the careful leadership which would become one of his main characteristics. He was present at the battle of Chotusitz (May 17, 1742) and at the siege of Prague (June to December 1742).

In 1743, Daun led the advanced guard of Khevenhüller's Army in the victorious Danube campaign.

In 1744, Daun served under Feldmarshall Traun, who had a high opinion of him. During the escape manoeuvre that allowed the Austrian army to disengage from the French and to attack Frederick II of Prussia, Daun was responsible for the rearguard of the army.

In 1745, Daun held important commands in the battles of Hohenfriedberg (June 4) and Soor (September 30), and was later promoted to the rank of Feldzeugmeister (General of infantry).

In 1746 and 1747, Daun served in the Low Countries where he took part in the battle of Lauffeld (July 2, 1747). Maria Theresa had Daun in high esteem. She made him commandant of Vienna.

In 1748, Daun was entrusted with the reorganisation of the Austrian army. The most noticeable improvements were done in the artillery by Fürst Wenzel von Liechtenstein and to the infantry by the introduction of the iron ramrod.

In 1749, the new regulations resulting from Daun's work were issued to the entire army.

In 1753, Daun was appointed Knight of the Golden Fleece by Maria Theresa.

In 1754, Daun was promoted Feldmarshall.

In 1756, Daun did not take port to the campaign of Saxony.

In 1757, Daun was placed at the head of the army which was raised to relieve Prague. On June 18, during the Prussian invasion of Bohemia, he defeated Frederick II in the battle of Kolin, forcing him to abandon the siege of Prague. After this brilliant victory, Maria Theresa instituted the "Order of Maria Theresa" and nominated Daun as its first Großkreuz (Grand Cross). After the victory, Daun's Army made its junction with the Austrian army previously besieged in Prague. Daun was now subordinated to Prince Charles. The combined armies pursued the retreating army of Frederick II and proceeded to the invasion of Silesia where, on November 22, they defeated a small Prussian army left behind the main force in the battle of Breslau. However, by the end of November, Frederick reappeared in Silesia with his main army. On December 5, he defeated the Austrian army led by Prince Charles in the battle of Leuthen. After this disastrous defeat, Prince Charles resigned his command and Daun was appointed commander-in-chief.

In 1758, Daun inaugurated a war of manoeuvre that would characterize him throughout the conflict. He was often overcautious, missing good opportunities to defeat his enemies. However, he always managed to contain the strategy of Frederick and to deprive him of any decisive success. Indeed, Frederick started the 1758 campaign by the invasion of Moravia where he undertook the siege of Olmütz. Loudon, acting under Daun's instructions, forced Frederick to raise this siege. On October 10, Daun surprised and defeated Frederick at the battle of Hochkirch.

In 1759, Daun continued his war of manoeuvre. At the end of November, he encircled an entire Prussian corps at Maxen and forced it to surrender. However, in the same year Loudon was defeated in the battle of Liegnitz and Daun in the battle of Torgau. These defeats all but annihilated the Austrian success at Maxen. Daun had been severely wounded during the battle of Torgau and had to return to Vienna to recover.

In 1762, Daun was appointed President of the Hofkriegsrath (Court's War council).

Daun died on February 5 1766. By the order of Maria Theresa a monument to his memory was erected in the church of the Augustinians in Vienna, with an inscription styling him the "saviour of her states."