The regiment was raised in 1703 for Lieutenant-colonel Grundel.

During the Great Northern War, the regiment took part in the campaign in Scania in 1710.

On September 8 1722, the regiment was designated “Drottningens Livregemente” (Queen's Guard Regiment). This permanent unit consisted of 12 companies of about 127 men each, in a single battalion of 1,530 men (mostly Germans).

Until 1757, 4 companies of the regiment garrisoned Stralsund in Swedish Pomerania while 600 men were stationed in various places in Sweden: Kalmar, Karlshamn, Varberg and Göteborg.

By the end of August 1757, the entire regiment (about 1,400 men) had been transported across the Baltic towards Swedish Pomerania.

On August 27 1759, during the campaign of Pomerania, the regiment formed part of the force under the command of Major Anrep who, after an artillery preparation, stormed Swinemünde, capturing Lieutenant-colonel Prentz, 80 men and 4 guns. However, part of the Prussian defenders managed to take refuge in the "West Redoubt" which the Swedes were forced to besiege in forms. On September 16, after a preparation of artillery, the regiment took part in the assault and capture of the fortified town of Wollin, attacking the Wicker Gate. On October 1, the regiment followed Fersen's Corps when it left the Oder islands to join the Swedish Main Army in Pasewalk. 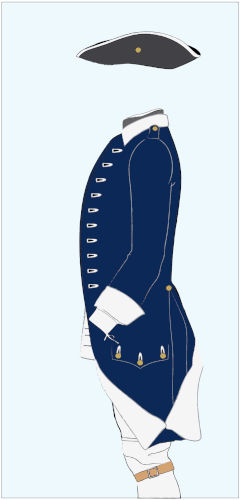 Schirmer as well as Pengel and Hurt mention brass button.

Musicians probably wore a white coat with blue swallow nests on the shoulders.