This regiment was raised on January 2, 1663. The king wished that the sons of the most illustrious families of France would make their first arms in this regiment. It initially counted only 20 companies whose officers came from the Mousquetaires. It was soon brought to 50 companies.

Soon after its creation, in September 1663, the regiment went to Lorraine and took part in the reduction of Marsal.

In 1667, at the outbreak of the War of Devolution (1667–68), the regiment joined the Army of Flanders and took part in the sieges of Tournai, Douai and Lille before garrisoning Oudenarde. In 1668, it returned to Saint-Germain where, during a review, the king decided to add 4 grenadiers to each company of his regiment, a measure soon extended to the other infantry regiments.

At the end of 1669, when the old Lorraine Infanterie (occupying the 14th rank of seniority) was integrated into Du Roi Infanterie, the latter regiment inherited the rank of the former.

In 1671, the regiment became the 12th of the army and acquired the privilege to be considered as the 6th of the Petits Vieux regiments. The regiment soon became a school where all improvements in discipline and tactic were initially introduced.

In 1680, the regiment assumed garrison duty in Lille. In 1683, it took part in the sieges of Courtrai and Dixmude, and in the bombardment of Oudenarde. In 1684, it was with the army that covered the siege of Luxembourg.

In 1701, on the eve of the War of the Spanish Succession (1701-13), the regiment left its quarters at Versailles and Saint-Germain to occupy various places in the Spanish Netherlands in the name of the new king of Spain Philip V. In 1702, it took part in the combat of Nijmegen; in 1703, in the sieges of Alt-Breisach and Landau, and in the Combat of the Speyerbach; in 1706, in the Battle of Ramilies; in 1708, in the Battle of Oudenarde; in 1709, in the sanguinary Battle of Malplaquet; in 1711, and in the attack on Arleux; in 1712, in the Battle of Denain, and in the capture of Marchiennes, Douai, Le Quesnoy and Bouchain. In 1713, the regiment served on the Rhine where it took part in the capture of Spires, Worms, Kayserslautern and Landau. It completed this long and terrible war by the capture of Freiburg. It then returned to its quarters in Marly.

In 1719, the regiment was stationed in Marly. Louis XV first saw this regiment during a general exercise in the Plain of Sablons. In 1721, it went to Paris for the visit of the Turkish ambassador. In 1722, it escorted the Infant of Spain from Arpajon to Versailles. In 1727, the regiment took part in the training camp near Richemont on the Moselle.

In 1733, at the outbreak of the War of the Polish Succession (1733-35), the regiment was sent to Italy where it participated in the sieges of Gera d’Adda, Pizzighetone and the Castle of Milan. In 1734, it fought in the battles of San Pietro and Guastalla and was at the siege of Mirandola. In 1735, it drove the Austrians out of Goito. In May 1736, it returned to France.

In 1739, the regiment took part in the training camp near Compiègne.

In 1753, the regiment took part in the training camp near Compiègne. It then marched to Nancy where King Stanislas of Poland had taken refuge with his court. On November 26, 1755, the regiment was at the inauguration of a new palace in Nancy.

On the eve of the Seven Years's War, the regiment counted four battalions and had prévôté (provostship). Exceptionally, compared to the standard organisation of an infantry regiment, each grenadier company counted an additional officer; and each fusilier company, 2 additional officers and 5 additional men. 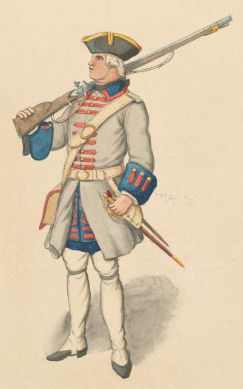 In 1756, the regiment was at the camp of Saint-Valéry.

In 1757, the regiment joined the Army of the Lower Rhine commanded by the Maréchal d'Estrées for the planned invasion of Hanover. On May 18, it arrived at Büderich to work at the entrenchment of the bridgehead. In June, it was encamped at Bielefeld with d'Estrées' main corps. On July 26, the regiment was at the Battle of Hastenbeck where it was part of the left wing under the Duc de Broglie. It advanced against the Hanoverian right. In this battle, the regiment lost Major de Saintenac, Captains de Raymond and de Sorbon, and 1 lieutenant, wounded. After the victory, it encamped from July 31 to August 2 at Grosselsen near Hameln with the main body of the Army of the Lower Rhine. Later on, it participated in the conquest of Hanover. After the Convention of Kloster-Zeven, it followed the main body, led by the Maréchal de Richelieu, who encamped at Halberstadt in Prussian territory from September 28 to November 5. In this camp, the regiment was placed in the centre of the first line. It later took part in the expedition against Celle. The defeat of the Franco-Imperial army at Rossbach in November caused the general retreat of all French corps behind the Rhine. At the end of the year, the regiment took its winter-quarters in Kassel in Hessen.

By May 23, 1760, the regiment was part of the first line of the infantry centre of Broglie's Army. On July 10, the regiment was part of the left wing of Broglie's Grande Armée which came to the support of the vanguard around noon at the Combat of Corbach. A few days later, it was among the corps which forced the Hereditary Prince of Brunswick to retire from Sachsenhausen. On July 31, it arrived too late to take part in the Battle of Warburg. On September 13 at daybreak, the regiment was part of M. de Stainville's Corps which was marching towards Frankenberg when it clashed with a retiring Allied corps between Rhadern and Münden/Ork. Both forces were separated by a wood and a small stream flowing into the Eder. Stainville reinforced his left with Bouillon Infanterie (2 bns) placed in the Castle of Lichtenfels. Combat began around 10:00 a.m. when M. de Scey at the head of Du Roi Brigade and M. de Melfort with the Légion Royale advanced. The Allies occupied positions on a steep hill. Nevertheless Auvergne Infanterie stormed these positions on the double. Fersen counter-charged the dragoons of the Légion Royale at the head of his cavalry but was made prisoner with some of his men. Then, the grenadiers and chasseurs of the brigades along with the dragoons of Légion Royale; du Roi, Auvergne, Bouillon and Royal-Pologne infantry brigades pursued the Allies up to the village of Neukirchen near Sachsenberg. Bülow was forced to abandon some guns to pass the defiles. In this action M. de Stainville took 400 prisoners and 8 artillery pieces and considerable baggage. By December 30, the regiment had taken its winter-quarters in Hanau.

By February 9, 1761, the regiment was attached to the Army of the Upper Rhine, in des Salles' Corps stationed in the region of Frankfurt. In mid-April, it was part of Poyanne's Corps posted at Echzell and Giessen. On July 16, the regiment took part in the Battle of Vellinghausen where it came to the assistance of the Deux-Ponts Brigade which had just made itself master of the village but had been counter-attacked by Lord Granby. After a hopeless resistance, it was forced to retire. On July 29, it encamped at Driburg. The regiment later took part in the combat of Neuhauss.

By March 1762, the regiment was attached to the Army of the Upper Rhine. On June 24, the regiment was present at the Battle of Wilhelmsthal. On July 1, M. de Guerchy marched on Melsungen with Du Roi Infanterie (4 bns), 1 dragoon rgt and some light troops and took position on the plateau on the right bank of the Fulda. The regiment, along with Bourbonnais Infanterie, successfully defended Melsungen, which was repeatedly attacked by the Allies. By July 12, the regiment was at the camp of Helsa.

In 1763, the regiment was stationed at Besançon. 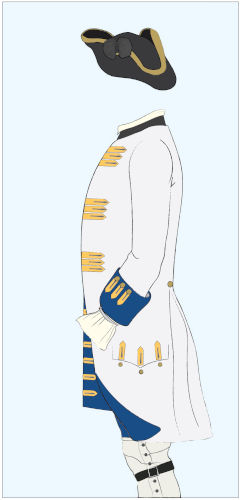 Ordonnance colours: a white cross charged with 48 golden fleurs de lys; the first and fourth cantons were red and the second and third cantons green. The motto "Per decori virtu" appeared on the flags in 1753.

N.B.: the manuscript "Troupes du Roi, Infanterie française et étrangère, année 1757" illustrates an ordonnance colour with a white cross charged with golden fleurs de lys and the motto "Per decori virtu". All four quarters are royal blue. This might be a new colour pattern issued in 1757.