The regiment was raised in 1742 for the Spanish crown in the Swiss canton of St. Gall. It initially counted 3 battalions.

In 1749, the regiment was reduced to a single battalion. In June of the same year, it was amalgamated with the Swiss regiment Schwyz to form a new regiment under the command of colonel Schwaller.

In 1755, this new regiment took the name of Antiguo de Reding, 3 companies of the new regiment still coming from the canton of St. Gall.

When the Swiss infantry was reorganised in 1756, all regiments were established at 2 battalions, of 4 companies each. This reorganisation was completed only in 1758.

In February 1758, the 3 companies originating from the canton of St. Gall formed the basis of the new Dunant regiment. In 1759, the regiment was quartered in Mataro, Tarragona, Tortosa, Villafranca del Penedés and Barcelona.

In 1772, the regiment took the name of its new colonel don Jorge Esdel baron of Thurn.

In 1798, the regiment was disbanded and its troops incorporated into regiment Rutiman. 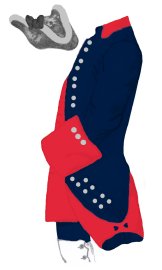 The batallonas (ordonnance flags) of the regiment were blue with a red Burgundian cross terminated in each corner by 5 flames (yellow, white, blue, white, yellow).