The unit was raised by Captain Hezekiah Dunn in New Jersey in September 1757. 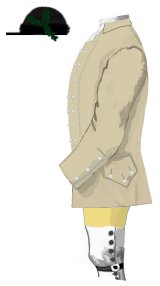 The unit probably had no colour.