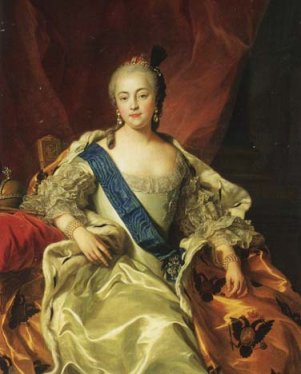 Peter the Great considered marrying her to the young French king Louis XV. However, the French court rejected this possibility. Other marriages were considered but rejected by Elizabeth.

In May 1727, at the death of her mother, Elizabeth was 18 years old and practically independent of any authority. She took advantage of her freedom to make a lover of Alexius Shubin, a sergeant in the Semenovsky Guards.

During the regency of Anna Leopoldovna, after the death of her cousin Anna Ivanovna, Elizabeth was supposed to take the veil according to the wishes of the Regent. Only the intervention of the Prince of Holstein (later Peter III) saved her from this destiny. At this point, Elizabeth began considering the possibility to overthrow the existing government. Indeed, La Chetardie, the French ambassador, was probably the first to suggest her such a course of action. The actual Russian government was under Austrian influence and France hoped to change this state of matter. Furthermore, Elizabeth feared to be imprisoned in a convent for the rest of her life.

At midnight on December 6 1741, Elizabeth along with her physician, Armand Lestocq, her chamberlain, Michael Ilarionvich Vorontsov, her future husband, Alexius Razumovski, and Alexander and Peter Shuvalov, two of the gentlemen of her household, drove to the barracks of the Preobrazhensky Guards. She managed to convince this regiment to support her claim to the throne. All the ministers were arrested. Then Elizabeth captured Anna Leopoldovna and her children in their beds in the Winter Palace. This done, she summoned all the civil and ecclesiastical notables.

On April 25 1742, Elizabeth Petrovna was crowned Empress in the Dormition Cathedral of the Moscow Kremlin. No sooner had Elizabeth assumed power that she abolished the cabinet council system and reconstituted the senate. She also placed Russians at the head of the various departments of state. This was a nationalist reaction againt the Braunschweig clan who had previously ruled Russia.

Most of the great powers of Europe were already at war since 1740. This war known as the "War of the Austrian Succession" opposed France, Prussia, Spain and Bavaria to Austria, Grest Britain and the United Provinces. However, on the diplomatic front, Elizabeth's first concern was to solve her dispute with Sweden.

On January 23 1743, direct negotiations between Russia and Sweden were opened at Abo. On the Russian side, these negotiations were supervised by the new vice chancellor Alexius Bestuzhev-Ryumin. On August 7 of the same year, Sweden ceded to Russia all the southern part of Finland east of the river Kymmene, which thus became the boundary between the two states, including the fortresses of Villmanstrand and Fredrikshamn. Concerning the ongoing conflict in Europe, Bestuzhev-Ryumin was not favorable to an alliance with France and Prussia, seeking instead to forge an alliance with Austria and Great Britain.

In 1748, Russia finally sent an auxiliary corps of 30,000 men to the Rhine to assist Austria. However, this force arrived too late because, meanwhile, peace had been signed between the warring states at Aix-la-Chapelle on October 18 1748.

On January 16 1756, Great Britain and Prussia signed the treaty of Westminster whereby the two countries would unite their forces against any foreign power entering Germany or traversing it. Elizabeth considered this treaty as subversive and estimated that Prussia represented a danger to the Russian Empire. Accordingly, she joined the Franco-Austrian alliance, determined to reduce the power of Prussia within reasonable limits and Frederick II to the rank of an elector.

On May 17 1757, a Russian army, 85,000 strong, advanced against Konigsberg. Despite being seriously ill since September 1757, Elizabeth remained firm in her determination to fight Prussia.

On August 12 1759, Frederick II of Prussia suffered a crushing defeat at Kunersdorf at the hands of the Russian army. Only the total absence of coordination between the Russian and Austrian commanders saved him from losing the war during this campaign.

On January 22 1761, the French ambassador announced to the court of Saint-Petersburg that Louis XV desired peace. On January 23, the Austrian ambassador, Esterhazy, presented a similar despatch. On February 12, Elizabeth replied to the French and Austrian ambassadors that she would not consent to any pacific overtures until the power of Prussia had been brought down. Meanwhile, Elizabeth opened secret negotiations with France, hoping to strengthen the alliance with this nation. However, these negotiations failed. The campaign of 1761 was no more successful as the campaign of 1760. The Prussians remained on the defensive and the Russian army led by Rumyantsev only succeeded in capturing the fortress of Kolberg on December 25.

By the beginning of January 1762, Frederick II was convinced that the war was lost. He had even started to make arrangements to secure a fragment of Prussia for his successor during the negotiations. However, a few day later, the situation totally changed when Empress Elizabeth Petrovna died on January 5. With the accession of Peter III, Frederick II had now one of his unconditional admirer at the head of his most powerful opponent.