This dragoon regiment was raised at his own expenses by the general of cavalry Gustav Hannibal, Count Löwenschild in 1688.

In 1690, the regiment was at the blockade of Kanischa. In 1691 and 1692, it took part to the bloackade and then to the two sieges of Grosswardein. In 1697, under Prince Eugène de Savoie, it participated to the siege of Zentha and to the expedition in Bosnia.

At the beginning of the War of the Spanish Succession, the regiment was cantoned at Eisenbirn on March 11 1703 when it was attacked by the Bavarians who were repulsed. The same year, the regiment was sent to Hungary to fight the insurgents. It took part in the battle of Lewenz under the command of its Inhaber, Count Leopold Schlick. In 1704, the regiment campaigned again in Hungary where it fought at Gyarmath near the Raab and at Tirnau. In 1705, it fought again at Bibersburg and Schibo. For the campaign of 1713, the regiment joined the Austrian army on the Rhine.

In 1732, when King Friedrich Wilhelm I of Prussia visited Emperor Carl VI at Kladrub in Bohemia, the grenadier company of the regiment formed the guard of honour.

During the War of the Polish Succession, the regiment initially served in Italy in 1734 and 1735. At the battle of Parma, on June 29 1734, its grenadier company was part of the converged unit which led the first charge. The commander of the regiment, Colonel Nikolaus Count Palffy, was killed during the battle. On July 23 of the same year, the regiment, now counting 1,055 men and 955 horses, was at the camp of Guingentole in Upper Italy, in the corps of Field Marshal Count Lothar Königsegg. By May 1735, the regiment had been reduced to 480 men, mostly by illness. In June, the regiment was part of Count Khevenhüller's observation corps on the Po river. It had to escort a supply convoy to Villimpenta and Castellaro then, on June 15, it joined the main army at Castiglione. The regiment along with 14 other cavalry regiments then covered the retreat of the army towards Rivoli. On June 19, it reached Villa-Franca.

In 1737, the regiment made the campaign against the Turks. At the beginning of September, it was part of Count Wallis' corps near Watowil. In 1738, the regiment took part to the encounter of Kornia. In 1739, it fought at the battle of Krotzka and then took its winter quarters in Transylvania. In 1740, it was assigned to the “Residenz” in Vienna.

During the War of the Austrian Succession, the regiment took part to the battle of Mollwitz on April 10 1741 where it was deployed on the left flank of Römer's wing. It suffered the following losses: Lieutenants Friedrich von Langenau and Anton von Mirka, Ensign Rudolf Evelin and 18 troopers killed; Captains Joseph Klein and Friedrich Wiese, Lieutenants Franz Stallenberg, Gundaker von Wolf, von Mirka, Ensign Friedrich von Wirbitz and 35 men wounded. On May 17 1742 at Czaslau, the regiment fought in Major-general Locatelli's brigade. It later took part to the siege of Prague. For the campaign of 1743, the regiment was part of Major-general Serbelloni's brigade in the the main army of Prince Carl von Lothringen operating in Bavaria. At the beginning of 1744, the regiment was still the army of Prince Carl on the Rhine but, in October, it was transferred to Major-general Defin's brigade in Bohemia. During the campaign of 1745, the regiment was in Major-general Bentheim's brigade as part of Baron Berlichingen's detachment operating in Silesia. At the battle of Hohenfriedberg, on June 4, the regiment suffered heavy casualties at the hands of Prussian hussars while protecting the retreat of the Austrian army. On September 30, at the battle of Soor, the regiment was part of the Kalckreuter brigade in the first line of Fieled Marshal the Duke of Arenberg's detachment. Once more, the regiment had to cover the retreat of the defeated Austrian army. During the campaign of 1746, the regiment, now counting only 838 men, served in the Netherlands in the army of Prince Carl von Lothringen. On October 11, it took part to the battle of Rocoux as part of Count Radicati's brigade. On July 2 1747, it fought at the battle of Lauffeld in Count Bentheim's brigade.

In 1767, the regiment was converted into a Chevauxleger regiment.

In June 1756, at the beginning of the war, the regiment was stationed in Bohemia and counted 815 men and 789 horses. On October 1, at the battle of Lobositz, it was with the cavalry of the right wing under the command of lieutenant-general Radicati in count O'Donell's brigade. However, these cavalry units were deployed in the centre of the Austrian positions. Along with the Cordova Cuirassiers regiment, it fought the Prussian cavalry and was in a bad situation when it was relieved by the Anspach and Bretlach cuirassier regiments from the Austrian left wing who forced the Prussian cavalry back to its lines. Meanwhile, the horse grenadiers of the regiment were assigned to the detachment under count Lacy deployed near Leitmeritz and along the Elbe up to Schreckstein. Colonel Friedrich Wiese of the regiment along with lieutenant-colonel count Fuchs and major count d'Alton distinguished themselves during this battle.

During the campaign of 1758, the regiment was at the combat of Königgrätz on July 12. Along with the Württemberg and Benedikt Daun dragoon regiments, the regiment withstood the charge of Bredow Cuirassiers and Möhring Hussars. By August 2 1758, the regiment served in the first line of the main Austrian army under the command of Daun near Jaromirs. Daun was following up the Prussian army retiring through Bohemia after the failure of the Prussian invasion of Moravia. On September 6 during an encounter near Spremberg, the regiment captured 2 officers, 143 dragoons and 20 hussars belonging to Möhring's detachment. On October 14, the regiment took part to the battle of Hochkirch where it was deployed in Wiese's column to the southeast of Kuppritz. The regiment, along with Herzog Württemberg Dragoons, occupied a defile behind the village of Plötzen and covered the village during the first attack. Captain von Posch was killed during this action.

During the campaign of 1759, the regiment operated in Silesia. By mid August, it was part of Buccow's corps posted in Lusatia. On September 2, it took part in the combat of Sorau.

On June 19 1760, in a combat against general Malachowsky on the heights of the Black Forest, a squadron of the regiment along with a squadron of the Althann Dragoons Regiment and 80 hussars captured 7 officers and 150 men. On June 23, the regiment took part to the battle of Lanshut where it lost 2 men killed and 8 wounded. During the retreat from Breslau, 400 dragoons of the regiment fought general Werner's force near Kanth. Despite their brave resistance the Austrians had to cede in front of a superior enemy and half of them were captured. On August 15, the regiment took part to the battle of Liegnitz where it had 3 men wounded and 2 reported as missing.

In August 1761, the regiment was among the 50 Austrian squadrons who joined the Russian army at Wahlstadt.

During the campaign of 1762, the regiment distinguished itself at the combat of Reichenbach on August 16. During this combat, it lost 3 officers wounded and 4 officers and several troopers captured. 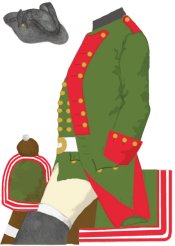 Drummers of this regiments of dragoons wore a uniform with inverted colours (red coat with green facings).

The drum barrel was made of brass. The top rim was red.