This regiment originally belonged to the Electorate of Würzburg. In 1685, it was taken in Imperial service and pay.

In 1685, during the Great Turkish War, the regiment was sent to Hungary where it participated in the siege of Neuhäusel (present-day Nové Zámky/SK). In 1686, it was at the siege of Ofen (Buda/HU). On 12 August 1687, it fought in the Battle of Mohács. It then remained in Slavonia as part of Dünewald's Corps. For the following years, the regiment campaigned in Hungary. On 19 August 1691, it distinguished itself at the Battle of Slankamen. On 11 September 1697, it fought in the Battle of Zenta.

In 1698, the regiment was transferred to Transylvania.

At the beginning of the Seven Years' War, the regiment was known as Hohenzollern.

In 1798, the regiment received number 3. In 1775, it was transformed into a light dragoon regiment and received the number 2. In 1802, the regiment was disbanded and its troopers were transferred to various dragoon or chevauxleger regiments.

In June 1756, at the beginning of the Seven Years' War, the regiment was stationed in Austria and counted 809 men and 794 horses. In September, it was in Bohemia with Piccolomini's covering force in the Königshof-Kolin region.

By August 2 1758, the regiment served in the second line of the main Austrian army under the command of Field Marshal Daun near Jaromirs. Daun was following up the Prussian army retiring through Bohemia after the failure of the invasion of Moravia. On October 14, the regiment took part in the Battle of Hochkirch where it was deployed in Buccow's cavalry column at the extreme right, to the east of Kotitz. 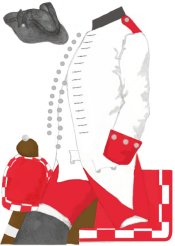 Other interpretations The Bautzener Bilderhandschrift of 1762 shows a silver lace on the tricorne, a red neckstock and straw breeches.

Donath illustrates a red neckstock and 13 buttons on the coat.

According to Donath, trumpeters wore a black tricorne laced white with a black round cockade bordered white and a black plume tipped yellow. They wore a red neckstock, a red coat laced silver with white shoulder straps, white swallow nests, white buttonholes, white cuffs laced silver and white turnbacks laced silver. Their waiscoat was white and their breeches red. Saddle cloth and sabretache were similar to those of the troopers.

The small "flag" attached to the trumpet was yellow with the initials of Erzherzog Leopold. We have not found any information about the kettle-drums.

The standards of the cuirassiers were square shaped and made of brocade or damask. Each side of the standard was made from a separate piece. The painted flagpoles were tournament lances.

Leib: white field with embroideries. No additional detail has been found in our sources. However, the Leib standards were usually decorated as follow:

Harald Skala for the section on origins and history