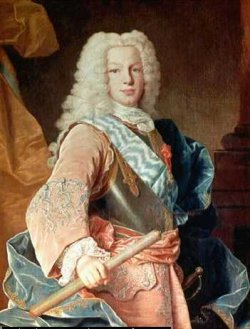 Ferdinand was the second son of Philip V, founder of the Bourbon Spanish dynasty, and Maria Louisa of Savoy.

Ferdinand's youth was depressed. His father's second wife, Elizabeth Farnese, was a managing woman, who had no affection for him, and looked upon him as an obstacle to the advancement of her own children. The hypochondria of Philip V left Elizabeth mistress of the palace.

Ferdinand was married in 1729 to Maria Magdalena Barbara, daughter of John V of Portugal. The future king of Spain was by temperament melancholy and shy. Shooting and music were his only pleasures, and he was the generous patron of the famous singer Farinelli, whose voice soothed his melancholy.

Ferdinand became king of Spain in 1746 as Ferdinand VI. During his reign, he followed a steady policy of neutrality between France and Great Britain. He did not like to take decisions but he could act firmly when the situation required it. Indeed, he encouraged industry and reorganized the navy.

In 1758, queen Barbara died. After her death, Ferdinand fell into a state of prostration in which he would not even dress, but wandered unshaven, unwashed and in a nightgown about his park. He died soon afterwards on August 10 of the following year.