The first mentions of this tercio date from 1633 but its official date of creation is 1663. Until 1715, the tercio would be known by the name of its Maestre de Campo.

In 1663, during the Portuguese Restoration War (1640–1668), the tercio was sent to garrison Fuenterrabia. It then marched to Pasages and Badajoz where it formed part of the garrison. In 1664, it took part in the battle of Ameixial; in 1665, in the battle of Montes Claros. In 1666, it served in the Province of Extremadura.

At the beginning of June 1668, the tercio was sent to Flanders.

In 1703, during the War of the Spanish Succession, the tercio served in the Franco-Spanish army in the Spanish Netherlands and took part in the Battle of Ekeren near Antwerp. In 1706, it participated in the attack on the lines between Menin and Courtrai and, in the defence Bruxelles and Dendermonde. In 1708, the two battalions of the tercio were sent to man the Lines of Ghent. They then reinforced the garrisons of Ghent and Bruges until their capitulations. On 28 September, they were at the Engagement of Wijnendale. In 1713, by royal orders, the tercio evacuated the Low Countries and marched to Catalonia to fight the insurgents, taking the tower of San Pol, routing the rebels at Manresa and Verdú, surprising the Castle of Biosca and relieving Berga. In 1714, the tercio protected the convoys destined to the army besieging Barcelona.

On 20 April 1715, the unit was renamed “Tercio de Cuenca” and stationed in Old Castile.

In 1718, the regiment was sent to Navarra where it garrisoned Pamplona.

In 1723, the regiment was sent to the coast of North Africa to defend Melilla and Peñon de Velez de la Gomera. In 1726, it returned to Spain where it was transferred to the District of Valencia.

In 1732, the regiment was sent to reconquer Oran from the Moors. In 1733, after the capture of the place, it assumed garrison duty in Oran and defended the place. The same year, the regiment was renamed “Regimiento Fijo de Orán”. From 1734 to 1744, it continued to defend Oran against the enterprises of the Moors.

The regiment did not take part in any action or campaign during the war. It was probably still stationed in Oran. 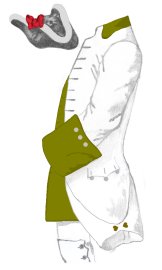