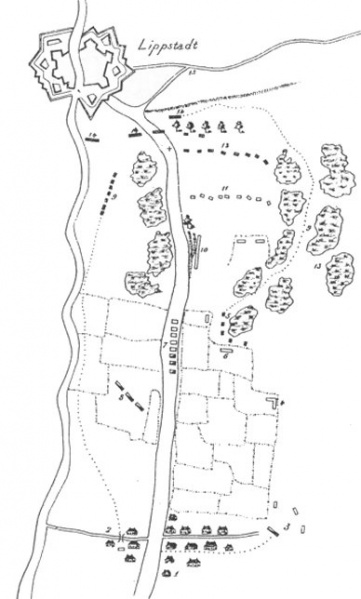 Sketch by the comte de Melfort of the engagement of Lippstadt.

1. Lipperode, a village 30 minutes from Lippstadt.
2. Drawbridge on a brook where a piquet of dragoons was placed.
3. French piquet of cavalry of the Volontaires to cover the right flank of the village.
4. French infantry piquet to cover the right flank of the cavalry column.
5. Hanoverian jägers firing at the head of the column.
6. French dismounted piquet of dragoons exchanging fire with the jägers.
7. French cavalry column ready to debouch.
8. French dragoons positioned to support the cavalry.
9. Retreat of the Hanoverian jäger unit on the right and left.
10. French Infantry positioned to support the skirmishers of the infantry as well as of the cavalry.
11. French skirmishers.
12. Hanoverian skirmishers.
13. Marshy terrain.
14. Hanoverian troops.
15. Road to Münster.
+. Place where the conference took place.