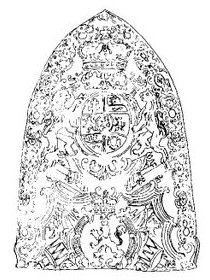 Front plate of the mitre cap of the Hesse-Kassel grenadier companies about 1760.

The plate shows the crown of a Graf over the H-K crest with lion supporters, over cannon, over a crowned cartouche of the crowned Hessian lion. The border is made up of ovals bearing a flaming grenade, then a "flower", then an 8-pointed star, a flower, grenade etc.