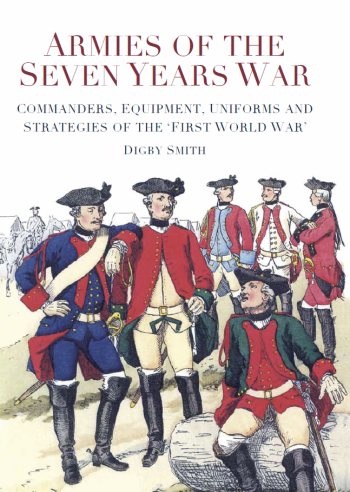 Availability through The History Press and Amazon UK and soon through Amazon USA among others.

Abstract: Drawn from many international sources, many not employed before in English-language publications, Armies of the Seven Years War is the finest reference work on this most complex of conflicts. It details the senior commanders, uniforms, weapons, equipment, artillery, strategy and tactics (military and naval) of the forces that fought — in effect — for world supremacy from 1756 to 1763. States involved included Austria, Bavaria, Britain, Brunswick, Hanover, Hessen-Darmstadt, Hessen-Kassel, France, the Palatinate, Portugal, Prussia, Russia, Spain, Sweden, Württemberg and the minor states of the Holy Roman Empire. The colonial struggle in North America is not neglected.

Coverage of the uniforms and colours is in depth. The tactics of the ‘horse and musket’ era are examined, as are Frederick the Great’s abilities as a war leader who led his armies against the rest of continental Europe. This book is published on the 300th anniversary of the birth of that brilliant military strategist, Frederick II. With over 280 illustrations and specially commissioned battle maps, Armies of the Seven Years War is an invaluable resource for the modeller and wargamer, as well as a clear analysis of an extraordinary period of international conflict for all those with an interest in the history of empire.

William Pitt, 1st Earl of Chatham, Britain’s war leader, stated that ‘America was won in Germany.’ How could Prussian successes on the continent of Europe have sounded the death knell for New France and Spanish ambitions in North America? Armies of the Seven Years War explains the connection and the outcomes of all the complex alliances that led to the ‘first world war’.

This file contains additional information, probably added from the digital camera or scanner used to create or digitize it. If the file has been modified from its original state, some details may not fully reflect the modified file.
Retrieved from "http://kronoskaf.com/syw/index.php?title=File:New_book_by_Digby_Smith.jpg&oldid=5438"