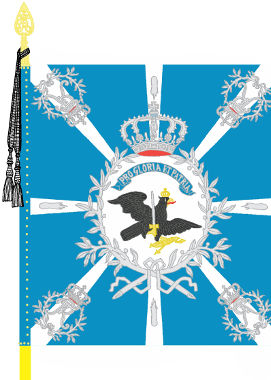 This illustration based on a photograph of a surviving flag, which is now held in the artefact archives of the German History Museum in Berlin (artefact information: Fahne Infanterie-Regiment Nr. 34 Prinz Ferdinand, Leibfahne bis 1760; Inventarnr. Fa 2008/57; GOS-Nr. MI011220). The blue has darkened considerably with age and the colour shown on this illustration is based on descriptions of the blue by Riehn, Bleckwenn and Lehmann, as well as the "most blue" areas of the photograph, using Corel Photo Paint to analyse the RGB and CYMK values across the image. However the artefact clearly shows that eight blue 'wedges' were inset into the flag, not four, as is commonly stated, in error, in English language and some German language publications. The surviving flag also corresponds with the pattern for the IR Nr 34 Leibfahne shown in the surviving copy of the Darmstadter Handschrift.

This illustration is also based on a template taken from illustrations in Reinhold Redlin's Die Fahnen und Standarten der preußischen Feldregimenter 1807-1918.

This file contains additional information, probably added from the digital camera or scanner used to create or digitize it. If the file has been modified from its original state, some details may not fully reflect the modified file.
Retrieved from "http://kronoskaf.com/syw/index.php?title=File:Prinz_Ferdinand_Ordonnance_Flag.jpg&oldid=15776"