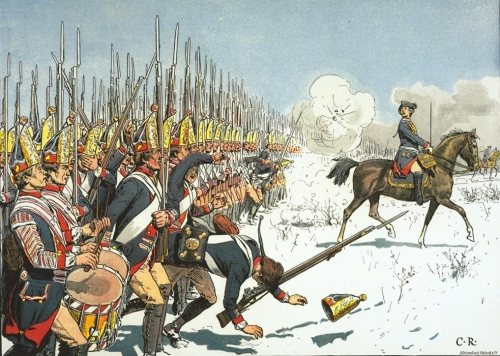 The term "Potsdamer Wachparade" was just a derogatory appellation used in the enemy camp to designate the whole Prussian army. This term was picked up and proudly accepted by the Prussians. "Hey, look! Even such a tiny outfit as our 'Wachparade' can defeat huge armies!"

This file contains additional information, probably added from the digital camera or scanner used to create or digitize it. If the file has been modified from its original state, some details may not fully reflect the modified file.
Retrieved from "http://kronoskaf.com/syw/index.php?title=File:Prussian_grenadiers_at_the_battle_of_Leuthen.jpg&oldid=6243"