The unit was created by an ordonnance issued by the Governor of the Spanish Netherlands on December 18 1694. In 1695, the unit was transferred to Spain.

In 1697, the unit took part in the defence of Barcelona until its capitulation, on August 10.

In June 1718, the regiment embarked in the port of Barcelona for the reconquest of Sicily. The same year, it took part in the siege of Messina. In 1719, it fought in the Battle of Francavilla. In 1720, after the loss of Messina, it re-embarked for Spain.

In 1721, the regiment joined the expedition in Navarra.

At the end of 1733, during the War of the Polish Succession (1733-35), the regiment embarked for Tuscany. In 1734, it fought in the Battle of Bitonto and took part in the siege of Capua. In 1735, a detachment participated in the sieges of the Castle of San Estephano, the Castle of Santa Catalina, the Castle of La Roca and Monte Filipo and of the places of Porto Ercole and Orbitello.

In 1736, the entire regiment returned to Spain.

In 1763, the regiment was incorporated in Milán Cavalry.

In 1762, the regiment participated in the campaign in Portugal. In 1763, when it returned to Spain, it was incorporated in Milán Cavalry. 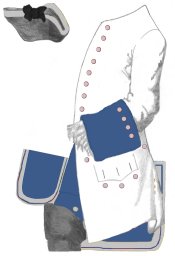 Standards: blue field fringed in silver; centre device consisting of a silver field escutcheon with a bundle of arrows tied with a red ribbon.