The regiment was formed on September 10, 1684 and took the name of the Province of Forez. Indeed, expecting a Coalition to soon form against France, Louis XIV raised 30 new regiments from September 1 to 30 for the defence of the various places of the realm. By raising one regiment a day, he avoided any problem of precedence among these new regiments. The new regiment was given to Jean-Noël de Barbezières, Comte de Chémerault.

After the war, the regiment was placed in garrison in Pratz de Mollo.

The regiment was incorporated in Angoumois Infanterie on April 26, 1775.

The regiment spent most of the war guarding the coasts of Normandie against British incursions.

By August 1, 1757, the regiment was stationed at Boulogne in Picardie.

On October 16, 1760, the regiment arrived at Rheinberg in Germany to reinforce Castries's Corps. 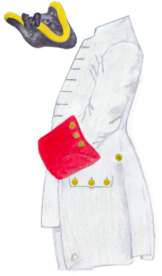