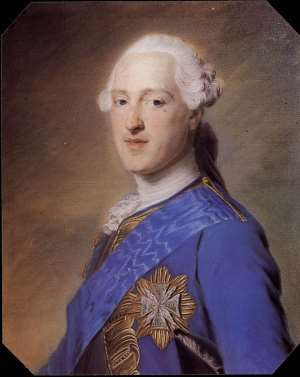 Prince Xaver of Saxony around 1758 (uniform of French lieutenant-general and Polish Order of the White Eagle). Strong and handsome he revealed to be versed in military art.

Franz Xaver von Sachsen und Polen und Lausitz was a prince of the House of Wettin. He was the fourth son of Friedrich August II, Elector of Saxony and King of Poland as Augustus III and of the Arch-duchess Maria Josepha of Austria. Out of three, only his older brother Frederick Christian survived to the major age.

Xaver was, at the same time uncle of King Louis XVI, Louis XVIII and Charles X of France, of King Charles IV of Spain and of King Ferdinand IV of Naples, of the Empress Marie-Louise, wife of Emperor Leopold II and of King Frederic-August III of Saxony.

The Prince of Lusatia (Lusace in French), from his childhood had always been interested in a military career. He grew up and was educated with his brother Karl in Dresden until 1748 by Joseph Anton Count von Wackerbarth-Salmour and by the captain of the Swiss Guard, Baron François Joseph de Forel. Then his former tutor was replaced, according to his father’s wills, by the Comte de Bellegarde, a French officer in Saxon service. The young prince never progressed very much in his studies. His style was judged severely1.

Service during the Seven Years' War 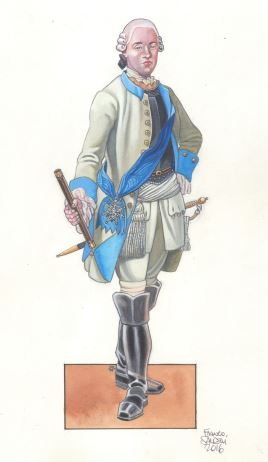 Prince Xavier as commander of the Saxon contingent during the Seven Years' War - Copyright: Franco Saudelli

When the King of Prussia Frederick II proceeded to the invasion of Saxony in August 1756, Xaver, was 26 years old. He had received a military instruction and had a limited command experience obtained when he entered in Austrian service. He joined the Saxon Army in its entrenched camp at Pirna, taking his quarters at Struppen. He then witnessed the encirclement and blockade of Pirna by the Prussians, and the failed attempt to escape across the Elbe. On September 1, after the disaster of Pirna, where the bulk of the Saxon army (around 18,000 soldiers) surrendered to the Prussians and was forcibly incorporated into the Prussian Army, Prince Xavier was chosen by his father as the ideal candidate to represent the willingness of the resistance of Saxony against the Prussian hegemony.

On January 1757, Prince Xaver was in Warsaw where he escorted the exiled King of Poland. At that time there was no more a Saxon Army. The only available forces consisted of a cavalry force of four regiments (the Karabiniergarde, the Prinz Karl, Prinz Albrecht and Graf Brühl chevauxlegers regiments, and two units of irregular “ulanen”, Rudnicki and Wilczewski, recruited in Poland (a total force of 178 Officers and 3,255 horsemen). This cavalry corps entered the Austrian service when the Imperial forces counter-attacked. Afterwards, Prince Xaver spent most of his time at the headquarters of the Austrian generals Browne, Leopold Daun and Prince Charles of Lorraine. Prince Xaver was present at the battles of Prague, Kolin, Moys and Leuthen, distinguishing himself in the latter battle. In December, Xaver was promoted to Lieutenant-General.

Meanwhile, a new Saxon infantry corps was being built from new recruits and from Saxon who had deserteed from the Prussian Army (the so-called “Revertenten” in German) to serve in French pay (see also: (The Saxon Corps serving with the French Armies 1758-1762). This infantry corps consisted of about 10,000 men in 12 regiments, for a total of 15 infantry battalions2. At the time of their re-raising the regiments Prinz Xaver, Prinz Friedrich August and Kurprinzessin were organized on a 2 battalion basis2.

At the beginning of 1758, Prince Xaver tried to join the French army. Through Vienna and Munich, he finally reached Versailles in June. He then accompanied the French army during the ensuing campaign. On June 23, he was present at the Battle of Krefeld. By a decree issued by the Elector of Saxony on September 13, Prince Xaver was appointed commander of Saxon auxiliary troops in the French service. Until the end of the war, he managed to preserve his corps and to provide money necessary for the pay of the soldiers.

In the Spring of 1759, Prince Xaver received command of the Saxon Corps, which was attached to an army under the command of the capable Maréchal de Broglie3. The corps was entirely dressed and re-equipped at French and Austrian expenses. Weapons came from Prussian, Hanoverian and Hessian captured arsenals. In August, the regimental artillery of the corps received 24 four-pounder guns as a present from the French Dauphine. She was one of Xaver's sisters. The colours of the new corps were made in Vienna, but were paid by the Saxon Feldkriegskasse. The Saxon Corps performed well, during the campaigns in Western Germany even if, notwithstanding a numerical superiority, the French led forces of the anti-Prussian coalition were initially unlucky. On August 1 1759, Prince Xaver performed well at the Battle of Minden when the Saxons covered the retreat of the Maréchal de Contades.

On August 9 1760, the Saxon Corps performed well at Kassel. At that time, he was in charge of the Reserve force of the Right Wing4.

In October 1765, Prince Xaver signed, in the name of the young Elector born in 1750 (the future King of Saxony allied to Napoleon), a formal renunciation to the Polish Crown in favour of Stanislaw Poniatowski, as required by the treaty signed between Prussia and Russia on April 11 1764. Saxony did not exert any authority in Poland any more. This was done against the wishes of the boy’s mother, the Dowager Electress Maria Antonia.

On September 15 1768, Prince Xaver resigned from his function of regent, receiving an annual pension of 70,000 talers. He then visited Italy and other European countries and lived afterwards in France.

At the end of 1771, Prince Xaver bought the estates of Chaumont near Sens but sold it again.

When the Revolution broke out, Prince Xaver left France precipitously and lived in Rome for a time.

In 1793, after the death of his wife, Prince Xaver returned to Saxony and lived at the Castle of Zabelitz near Großenhain which had been made available to him by his family. The same year, his properties in France were confiscated.

In 1802, Prince Xaver's only son, Joseph Xavier Karl, who served as officer in the Russian Army, was killed by Duke Tscherbatow in a duel.

On June 21 1806, Prince Xaver died at the Castle of Zabelitz. He was buried in the tomb of the House of Wettin in the “Hofkirche” of Dresden.

Prince Xaver left us a vast correspondence commenced in 1744 and ending in 1790. This huge amount of letters represents one of the richest French palaeographic treasures and consisted of 20 large crates for a total of 2,500 kilos of weight. This archive was abandoned since 1790 at the Chateau de Pont-sur-Seine, in the Aube Department. According to the new calendar of the Revolution, it was 29 Messidor An VI, when the archive was gathered and transferred at the new prefecture.

Franz Xaver, 20 years before that date had chosen to flee from France with his family, at the beginning of the French Revolution. They had moved to Rome where Xaver, remained for some years even after the death of his beloved wife, the Italian Countess Maria Chiara Spinucci5.

Then, in his old days, Prince Xaver decided to return to Saxony and settled in the Castle of Zabeltitz where he lived until his death on June 21, 1806. He was seventy-five.

5 During their marriage, the couple had ten children - known as counts and countesses of Lusatia - but only six survived to adulthood. Franz Xavier had married morganatically the Italian lady-in-waiting to his sister-in law, the Dowager Electress, on March 9 1765 in Dresden. The union was kept secret until 1777 when it was formally announced and legitimized.

Dr Marco Pagan for the initial version of this article; Harald Skala for additional information.