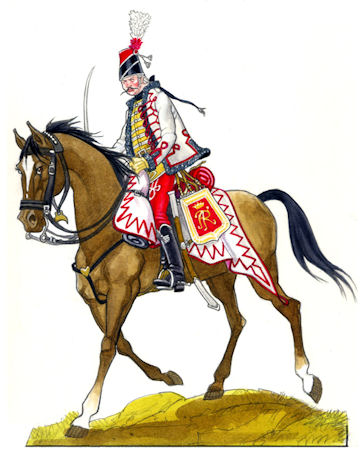 In 1761, Prince Xavier accepted the offer of Johann Georg Schill, serving as volunteer with some hussars in the Reichsarmee, to join the Saxon Contingent with his hussars. Schill gradually increased his small company to 100 men called Leibjäger and was promoted captain (Rittmeister) in the Saxon Army.

On campaign, this single squadron served as Life Guard for Prince Xavier (aka Comte de Lusace). According to Schirmer, this unit also included a number of mounted and foot Jägers. They might have been raised for similar tasks as the Fusiliers-Guides serving with the French General Staff.

The Gazette van Ghendt reports that, on August 27 1762, Captain Schill assaulted a Brunswig Turk and hussar party in the Erfurt area, killing some, taking prisoner a lieutenant and 26 men (also 30 horses). This is borne out by the Chronik von Erfurt(1).

During the later part of October 1762, Schill's mounted chasseurs and hussars are found in the vicinity of Gotha(2).

On November 4, Schill (supported by Ottosche Jäger) tried to surprise some Prussian troops in Weißensee (some 8 km NW of Sömmerda in Thuringia) and, even though these had been forewarned, succeeded in breaking down the town gates. They took prisoners some 30 Prussians prisoner and also got 40 horses and baggage as booty.(2).

On November 20 1762, Schill with hussars and mounted jägers surprised a small detachment of Brunswig Hussars and Türken which under the command of a captain had been forcefully collecting cattle in the Fulda and Würtzburg areas, having acquired some 100 heads. Some were cut down, some wounded and the captain and some 20 of his men taken prisoners, as were 30 horses. Schill then had the cattle returned to their original owners(sub>(3)</sub> (the location of this skirmish is given as 'Yhrsprünge'; this may be 'Urspring', part of Pretzfeld in Oberfranken).

Our sources for this uniform are an old plate by R. Trache, copied later by Schirmer 1989 and Friedrich 1998; and another plate in De Ridder collection kept at the Bibliothèque Nationale de France in Paris. 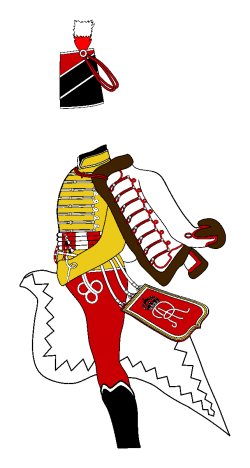 Frei-Husaren von Schill uniform in 1761 - Source: David at Not By Appointment

Troopers were armed with a short, curved sabre and two pistols. 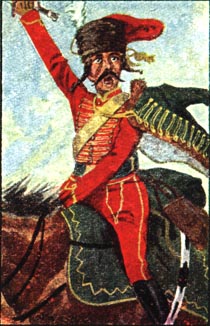 Harald Skala for additional information on this unit