Almost nothing is known about this unit of Freihussaren. Even Bleckwenn found no trace of this unit. However, it was specifically identified in Wellner's work and we can assume that:

So little is known on the uniform of this unit that we have been obliged to do some educated guesses. For instance, cuffs are based on common interpretation (cuffs in the dolman colour, with piping in the cord colour). Similarly, the barrel-sash is red and white since it usually was a combination of facing/dolman/pelisse colours and button colours. 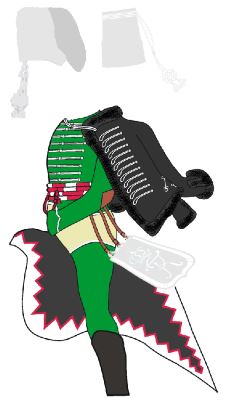 Uniform
Source: Dal Gavan from a template of Not By Appointment

Troopers were armed with a short curved sabre, two pistols and a carbine.

Officers of the regiment wore uniforms similar to those of the troopers with the following differences:

NCOs of the regiment wore uniforms similar to those of the troopers with more elaborate laces on the dolamn: around the pockets and cuffs and in the small of the back.

Michael Zahn for the information provided for the creation of the initial version of this article.