Associated with the Staff and under the command of the senior officers, there were also several Staff Officers. They did not constitute a specific corps and the officers composing it came from two different sources. First of all, there were uncommissioned senior officers: lieutenant-generals or maréchaux de camps and brigadiers. Most of them had no effective command or command was assumed in turn. These "supernumerary" senior officers then served only as staff officers or as aide de camp. Finally, there were also a certain number of officers from various regiments: Maison du Roi, Gendarmerie, cavalry, infantry, artillery...

Senior officers had aides-de camp, to help them in their duties. Those were uncommissioned lieutenant-generals or maréchaux de camp or relatives or protégés, who were mestres de camp, colonels coming from the cavalry and infantry. These aides-de-camp were also part of the staff.

A senior officer could have more aides-de-camp than allowed by the regulations, however they were not paid by the king. 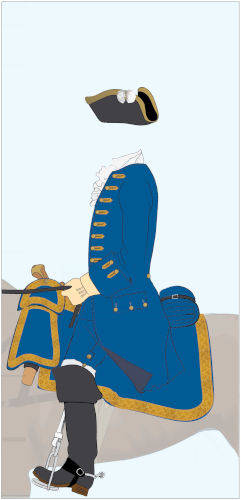 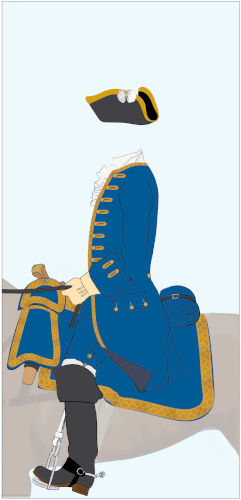 Until 1757, all the staff officers kept the uniform of their own unit. They may have had a distinctive mark on their uniform, like a white plume at their hat, a sash or an armband.

In 1757, a regulation specified the uniforms of the officers of the Staff as well as those of the aides-de-camp. Information about this regulation was published in the Mercure de France of April 1757:

"From Paris, on March 19 1757: a King's ordonnance has been published to regulate the uniform of the officers of the Army Staff of his Majesty and of those employed as Aide de Camp. Both will wear a single-breasted coat of a colour commonly known as royal blue, lined with a fabric of the same colour. These coats will have gilded copper buttons. The officers of the Staff will have coats with buttonholes embroidered with a gold thread, eight on each side down to the pockets, three on each pocket and two on each cuff. The chiefs among these officers will be allowed to wear braids of the same style as the buttonholes. It they are general officers, they will wear the uniform associated with their rank."

N.B.: the text of the regulation did not specify whether the collar was also laced. In the accompanying illustration, we assume that it was.

The housing colours are unknown but were most probably royal blue laced gold.

It is probable that a certain number of officers of the Staff continued to wear the uniform and the distinctives of the regiment that they owned. The regiment being now commanded by a colonel-commandant. The uniform was then at the colours of the regiment but made of a better quality woollen fabric, with the waistcoat laced in gold, they distinguished themselves by a white plume at their hat and by the rich array of their horse.