After the intendant came the commissaires des guerres (war commissioners) who were subordinated to him and who applied the regulations and control them.

War commissioners had to be registered by a Maréchal de France to whom they had to swear oath. Their charges were venal and hereditary. Each Maréchal de France, upon nomination, had the privilege to designate a war commissioner whose office was not hereditary and ended at his death. Venality of charges was thus present in this function as well and money sometimes replaced competence.

The war commissioners were charged with police, troop discipline, enforcement of military regulations, quantity and quality of the distributed supplies, repairs and fortification of the places, construction of the ovens, lodging of the officers and soldiers, guard and conservation of food supplies (wheat, flour, oatmeal, medicines...), distribution at the end of each march, administration of the hospitals...

Their power was so great that they could decide the interdiction of an officer, the suspension of his wages, even his arrest. This power was not without enticing the envy of the nobility. So by a regulation of August 1715 the king, who had granted hereditary nobility to the royal commissioners, revoked all nobility granted for military charges to those who were not noble before 1689. 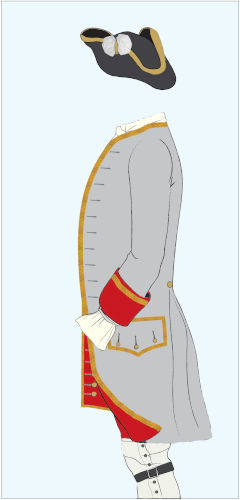 The uniform of the Commissaires des guerres was fixed by a decision dated March 27 1746 which specified that they would wear an iron grey coat lined red and edged gold with red cuffs. The Commissaires ordonnateurs had a two golden braids on the cuffs and pockets.

It is most probable that the intendant général de l'armée wore a particular uniform. However, we have not been able to find any text describing this uniform.

An article written by Michel Pétard in the magazine Tradition (N°136-1998), a painting from the Anne SK Brown Military Collection military collection is reproduced. On the right, behind general officers, stand two gentlemen who seem to belong to the supply corps. In the foreground, the gentleman who is probably the intendant en chef de l'armée wears an iron grey coat with grey cuffs with two golden braids edging the coat as well as the cuffs, red waistcoat edged with two golden braids. Barely visible behind this gentleman stands an officer of the supply corps wearing an iron grey coat edged gold and a red waistcoat.

It must be noted that the commissaires des guerres also had a “great uniform” for certain corps as the Maison du Roi and the Connétablie. This uniform is mentioned in a warrant of the King's State Council of August 17 1761 which created two brigadiers and sub-brigadiers in a company of the Connétablie. This warrant stipulated that “... the company comprises a general provost, … , and a commissaire des guerres who is authorised to wear the great uniform as do the commissaires des guerres of the various units of the Maison du Roi”.