The regulation of May 28 1733 specified that horses destined to the French cavalerie légère (in fact the heavy cavalry) had to be of a height of at least 4 ' 8”, measured from beneath the horseshoe to the base of the mane at the withers. This same regulation also repeated that horses should have a long tail as the regulation of September 25 1680 already stated.

Details of the saddlery are taken from the work of Dugué MacCarthy on the French cavalry and its harnessing. This work makes a clear summary of the regulation of June 1st 1750 and of La Porterie's manuscript Institutions Militaires.

Saddle was said to be à la Royale, it was identical for the entire French cavalry: cavalerie légère, gendarmerie, dragoons and officers; to the exception of the hussars whose harness where à la Hongroise (Hungarian style).

All leathers (seat, skirts, flaps, holsters...) as well as the harness were black. The accompanying illustration shows brown leather just to help to distinguish the various parts. 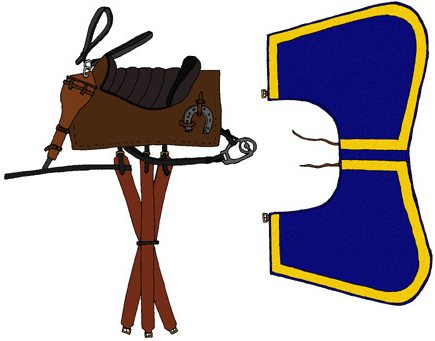 The two spare horseshoes were fastened with a small strap to a eyelet hole on each flap.

The fully equipped saddle had 3 straps to carry burden and two straps to fastened the great coat. Each of these straps measured 162 cm long.

Holster caps, consisting of a flap and an apron, covered the holsters. Each holster cap had a button and a buttonhole to turn back the flap thus clearing the butt of the pistol.

A padded cushion could be attached with straps behind the saddle to protect the back of the horse from the friction of the crupper strap when the saddlebag and the great coat were carried behind the saddle. The bellyband was fixed to the fore-part of the saddle.

The housing was made of woollen cloth lined with ticking and bordered with the regimental braid. It was fixed to the rear of the saddle with a strap and two buckles.

The flaps of the saddle had padded knee rolls. The saddle was placed on the horse back over a blanket folded in four.

Hereafter, we illustrate the general aspect of a fully equipped saddle. Our plate is based on the work of Drumond de Melfort. Once more, we used brown for the leather to better distinguish the various part, but the regulations clearly stated that all leather had to be black. 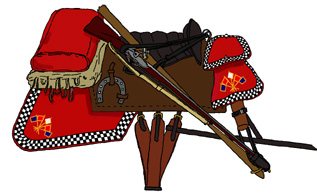 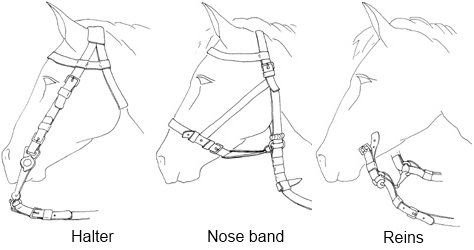 The head band can be equipped with a small chain to protect the head of the horse from sabre blows.

The trooper put away his small equipment in his saddlebag (also called portemanteau) fixed at the rear of the saddle. This saddlebag measured approximately 113 cm long by 43 cm wide and was made of ticking. It comprised a main compartment and two small pockets and contained the necessary objects for the upkeep of the trooper and his horse. In addition, the great coat was carried folded over the saddlebag along with a blanket for the horse, a surcingle, a bag (for oat) and a canvas smock frock used when grooming the horse. 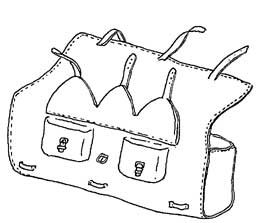