French line infantry colours were made of thick pieces of silk fabric sewn together. For this reason the colours proper were designated as les soies (the silks). 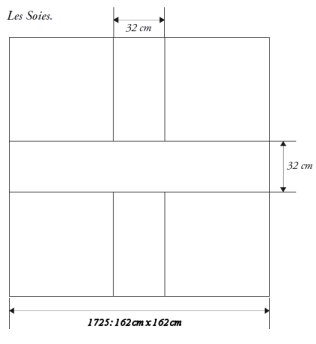 The size of these colours widely varied through time. During the Thirty Years' War (1618-1648), they usually measured 300 cm by 300 cm. Then at the end of the XVIIth century the size of colours, which were still of a square shape, varied from 250 cm to 280 cm. At the beginning of the XVIIIth century, size was reduced once more and the square colours then measured between 204 cm and 227 cm. In 1725, regular size was reduced once more to 162 cm while the square shape was retained for most regiments. By this date, the branches of the white cross measured 32 cm. The Encyclopédie, published in 1785, confirms that the regular size of colours was 162 cm by 162 cm.

However, there were many exceptions to this rule. Colours were sometimes of a rectangular shape: wider than high or higher then wide. For instance, a colour of Normandie Infanterie kept in Gap measures 210 cm high by 180 cm wide. Furthermore, colours of Swiss regiments in the French service were traditionally larger. Here are a few measurements of these colours:

Since colours were made of a single assemblage of thick pieces of silk fabric, they did not present the same disposition on the obverse and reverse. In fact, disposition was inverted on the reverse. 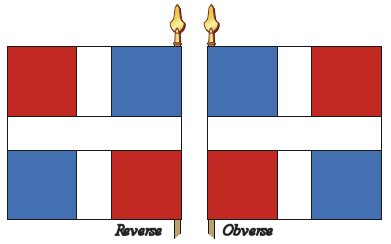 The Soies of the French line infantry colours seen from obverse and reverse – Source: Gilbert Noury 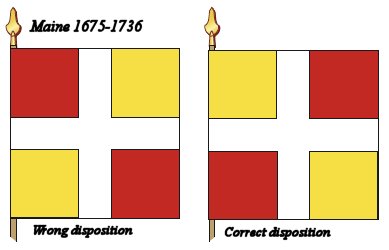 Disposition of the Soies of the French line infantry colours on the pole – Source: Gilbert Noury

The Fleurs de Lys were painted on the colours with ormolu (ground gold) and shaded in black of dark brown. The design of the Fleur de Lys evolved through time. 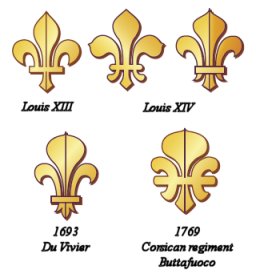 Evolution of the design of the Fleur de Lys – Source: Gilbert Noury 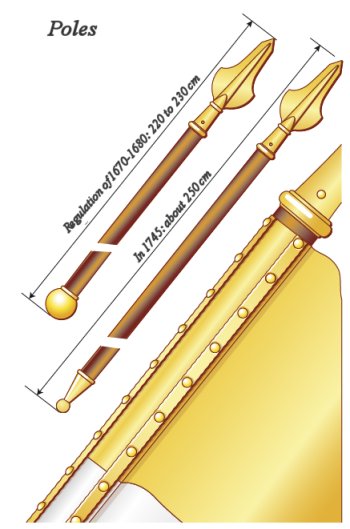 Poles of French line infantry colours with details of the fixing of the Soie – Source: Gilbert Noury

Towards the end of the reign of Louis XIV, in 1696, it is the short model of pole that Giffard reproduces as per the regulation of 1670-1680. In this period, the poles measured between 220 cm and 230 cm. At the beginning of the XVIIIth century, poles reached a length of 360 cm, including the finial of gilt iron. For example, the pole of a colour of Dauphin Infanterie, dating from 1705 and kept in the Museum of Turin in Italy, measures 368 cm.

Poles were made of beech, ash or Biscaye wood. They had a diameter of about 2.7 cm and were usually varnished but often painted in blue. In some cases, the poles were painted in the dominant colour of the Soie. For example, for example, the Swiss Steiner Infanterie carried had poles painted in red. For Gardes regiments, the poles were sometimes covered with a raw silk ribbon.

In 1785, the length of the poles was fixed at about 268 cm. Nevertheless, in 1791, the Swiss Steiner Infanterie carried colours on poles measuring 285 cm.

The Soie was nailed directly to the pole with gilt nails (from 80 to 90 nails at the beginning of the XVIIIth century, 56 nails in 1785) arranged in three rows. To avoid that the Soie tear apart, woollen braid were placed under each row of nails. 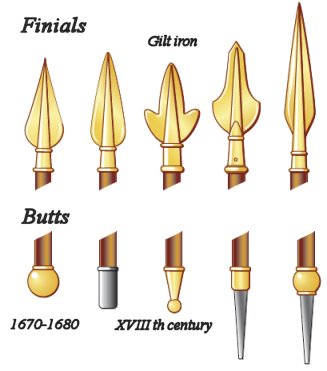 Finials and of French line infantry colours with details of the fixing of the Soie – Source: Gilbert Noury 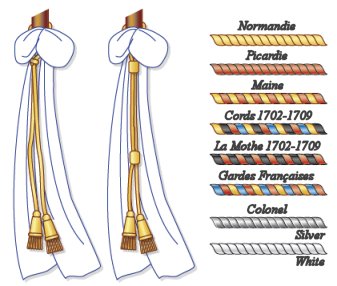 After the cruel mistake at the battle of Fleurus in 1690, where the French artillery had fired on French regiments, it was decided to affix a white ribbon (cravate) to the poles of the colours to distinguish French regiments from others.

The cord (cordelière) used to fasten the ribbon to the pole was made of braided silk with a tassel at each end. These cords were always silver or white on the Colonel flags. However, on the Ordonnance flags they were made of various colours reflecting those of these flags.

Number of colours per regiment

This measure applied also to most foreign regiments to the exception of Swiss regiments, which continued to carry one colour per company. Each regiment counted two battalions of 6 companies each. Thus a Swiss regiment carried 12 colours: 1 colonel colour and 11 ordonnance colours. The colours are always placed in the centre of the first platoon of each company.

Gilbert Noury for all illustrations and for the initial version of this article.