The ordonnance dated February 1744 constituted the “birth certificate” of the uniforms specific to the staff of the French armies.

Up to the last decades of the XVIIIth century, staff officers wore richly embroidered civilian clothes. Looking at pictures such as those of van der Meulen, one can see that blue was the prevailing colour for uniforms of staff officers. However, these officers sometimes wore the uniform of the unit placed under their command. In such a case, tehir uniform and saddle cloth were usually richly embroidered and laced, they only distinguished themselves from the other officers of their unit by a white sash and the white plume at their tricorne.

Between the War of the Austrian Succession and the Seven Years' War, the basis of the uniform of staff officers and of the troops at their service was gradually put in place. The first official text appeared in 1744 and concerned the lieutenant-generals and maréchaux de camps. Then an ordonnance in 1757 regulated the uniforms of the staff officers employed as aides-de-camp. 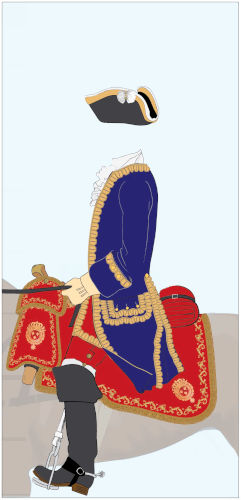 The ordonnance of February 1st, 1744 who regulated the uniforms of general officers serving in the King's army stated that:

“His Majesty considering the importance that all general officers employed in his armies, be promptly recognized in all occasions. His Majesty has judged necessary to regulate for them a uniform clothing. Consequently, he has ordered that his lieutenant-generals and maréchaux de camps will be bound to wear throughout the campaign, a single-breasted coat of the colour commonly called bleu de Roi decorated with a braid-like golden embroidery; in accordance with the sample which will be attached to the original of the present ordonnance: with the sole difference between lieutenant-generals and the maréchaux de camp, that the former will have double trimmings on the cuffs and on the pockets and that the maréchaux de camp will have only a single trimming.”

From this period, all general officers at the army could wear only the regulation uniform. There were certainly exceptions but we can reasonably assume that they were rare. It was the case of the Comte de Bercheny who had just been promoted inspector-general of the hussars in December 1743. He asked to the Comte d'Argenson, minister of war, for the authorisation to continue to serve with his Hungarian uniform. This derogation was accepted providing that he would own a regulation uniform of maréchal de camp in the case where he would have to serve with the staff detached from the hussar regiments.

Nevertheless, the text of 1744 did not prevent some sartorial slip-ups allowed by the too vague regulation and who led in 1766 the Marquis du Muy to write:

“Would not His Majesty judge appropriate to fix the uniform of general officers of his troops. The necessity of this is demonstrated by the so great diversity existing today among the 540 lieutenant-generals and maréchaux de camp where there are not two uniforms looking alike... Some by vanity have enriched it by enlarging it and by putting sequins, curls and puffs; others by economy have diminished its width, others have added a foxing which trims better, but was not in the model, others have formed smaller ones because the large ones seemed too expansive to them; others have added reversed collars, other have put a straight one; others have put red waistcoats, others yellow waistcoats whose colour is easily soiled and gives too little contrast with gold. All of them finally reveal, even at an advanced age, the casualness which we would like to attribute only to the young people of the nation...”

This precise regulation had to wait the ordonnance of September 2, 1775 which added all the missing precisions.

Evolution of the uniform

Despite the absence of precise texts till the publication of the ordonnance of 1775, the study of several pictures allow us to observe a general tendency on the evolution of the uniform of the general officers between 1744 et 1775.

Concerning the volute braid, it must be noted that this braid appeared much earlier than 1775, probably during the War of the Austrian Succession and, in the measure that it rapidly generalised during this period, there is probably an instruction or an ordonnance which had been issued but had been lost since that time.

The other characteristic evolution concerns the collar. Until the 1750s, the braid edging the front of the collarless coat usually stops at the neck. After this period, the braid edged the coat along the neck as well. Finally, with the generalisation of the collar on the coat during the Seven Years' War, this collar was edged with a volute braid.

Prior to 1775, waistcoats could be scarlet or yellow decorated with volute braids or with various embroideries.

Buttons were probably regulated as soon as 1744 since pictures reveal buttons quite similar to those specified by the ordonnancen of 1775.

Red breeches seem to have been the norm from the beginning.