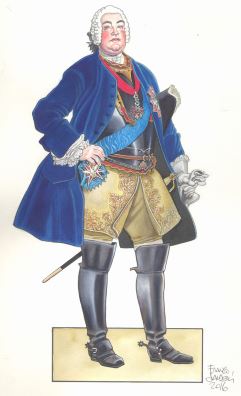 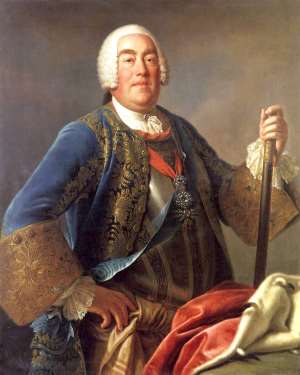 Friedrich August II, Elector of Saxony and King of Poland - Painting by Pietro Rotari made in 1755 - Source: Wikimedia Commons

Friedrich August was the only legitimate son of Augustus II the Strong, Prince-Elector of Saxony and King of the Polish-Lithuanian Commonwealth who belonged to the Albertine line of the House of Wettin. His mother was Christiane Eberhardine of Brandenburg-Bayreuth. Groomed to succeed his father as king of Poland, Augustus converted to Catholicism in 1712; when publicly announced, this caused discontent among the Protestant Saxon aristocracy.

Upon the death of Augustus II in 1733, Augustus inherited the Saxon Electorate and was elected to the Polish throne, with the support of the Russian Empire and the Holy Roman Empire. He was opposed by the forces of Stanisław I Leszczyński, who had usurped the throne with Swedish support during the Great Northern War. Reigning from 1706 until 1709, Stanisław was overthrown after the Swedish defeat at Poltava. Returning from exile in 1733 with the support of Louis XV of France, Stanisław sparked the War of the Polish Succession, which concluded in 1738 with a victory for Friedrich August's Russian and Imperial allies.

As king and prince-elector, Friedrich August was uninterested in the affairs of his Electorate of Saxony and of his Polish–Lithuanian Dominion, focusing instead on hunting, the opera, and the collection of artwork. He resided mainly in Saxony, spending less than three years of his thirty-years reign in Poland, where political feuding between the House of Czartoryski and the Potocki paralysed the Polish parliament, fostering internal political anarchy and weakening the Commonwealth. Friedrich August delegated most of his powers and responsibilities in the Commonwealth to Heinrich von Brühl, who served in effect as the viceroy of Poland.

At the outbreak of the Seven Years' War, at the end of August 1756, when Frederick II of Prussia proceeded to the invasion of Saxony, the small Saxon Army entrenched itself at Pirna. On September 8, as the Prussians were approaching Dresden, Friedrich August left the city with his two sons, Prince Xavier and Prince Charles, and his dignitaries. They all joined the Saxon Army at Pirna. Friedrich August called for the support of Austria and France. Austrian General Browne asked him to hold till October 11 when he expected to arrive with a relief force and help his army to retire towards Bohemia. However, the Austrians were late and the Saxons capitulated on October 16. On Wednesday October 20, the Prince-Elector of Saxony set out from Königstein for Warsaw while his queen remained in Dresden. On October 27, Friedrich August arrived in Warsaw where he remained, in relative political impotence, till the end of the war.

Friedrich August II died on October 5 1763 soon after his return to Dresden. His eldest surviving son, Friedrich Christian succeeded him as elector.

Most of the text of this article, to the exception of the sections related to the period between 1756 and 1763, is taken from the following articles of Wikipedia: