On March 31 1701, at the outbreak of the War of the Spanish Succession (1701-13), all Spanish dragoon tercios serving in the Spanish Netherlands were reorganised along the lines of the French dragoon regiments at the request of the Maréchal de Boufflers. In 1702, the regiment took part in an engagement near Nijmegen; in 1703, in the sieges of Alt-Breisach and Landau and in the Combat of Speyerbach; in 1705, in the siege and capture of Huy and in the unsuccessful defence of the Lines of Brabant; in 1706, in the Battle of Ramillies; in 1707, in an attack on the Lines of Stollhofen; and in 1709, in the attack of an Austrian camp at Rumersheim. In 1710, the regiment evacuated the Spanish Netherlands and marched through France to Catalonia. The same year, it campaigned against the insurgents in the region of Rivagorza. It then fought in the battles of Almenar, Saragossa, Brihuega and Villaviciosa. In 1711, the regiment campaigned against the insurgents in the mountains of Aragon and Catalonia. In 1712 and 1713, the regiment continued to campaign in Catalonia. In 1714, it took part in the siege and capture of Barcelona. It then sent detachments to fight the insurgents.

In 1717, a detachment of 50 dragoons of the regiment took part in the reconquest of Sardinia.

On February 1 1718, the regiment was renamed “Frisia”. On 19 June, the entire regiment embarked at Barcelona for Sicily where it took part in the occupation of Palermo, in the siege of Messina and in the blockade of Syracuse. In 1719, it fought in the Battle of Francavilla. In 1720, it evacuated Sicily and returned to Catalonia.

In 1732, the regiment contributed 100 dragoons to the expedition against Oran and Mers-el-Kebir.

In 1734, during the War of the Polish Succession (1733-35), the regiment was sent to Italy, landing at Naples. It was soon transferred to Sicily where it occupied Palermo and took part in the blockade of Syracuse. It then returned to Naples and took part in the siege and capture of Capua. In 1735, the regiment once more campaigned in Sicily, taking part in the capture of Syracuse. It then returned to Naples to joined the army assembling for the conquest of Lombardy. In 1736, the regiment retired to Tuscany before embarking for Spain.

In 1739, the regiment was stationed in Jeréz de la Frontera in Andalusia.

On October 28 1765, the regiment was renamed “Villaviciosa”.

In 1762, the regiment was selected to form part of the Army of Extremadura for the planned invasion of Portugal. It was employed to cover and escort the convoys and the artillery. It was at the siege of Elvas and Campomaior. At the end of the campaign, it took up its quarters in Andalusia. 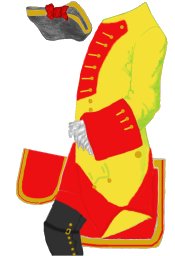 Juan José Torres and the Asociación Cultural de Modelismo Histórico Alabarda for the information and counseling provided for this article.