On February 27 1566, a unit known as the Tercio de Lombardia was raised by don Sancho de Londoño. It counted 10 compamies (4 of arquebusiers and 6 of pikemen), totalling 2,200 men. On June 2 1567, the tercio was incorporated into the expeditionary force led by the duke of Alba and destined to Flanders. This army crossed Savoy and Bourgogne, entered into Flemish territories and arrived at Thionville. From 1567 to 1577, this Spanish army fought the Protestants in the Low Countries. In 1577, the tercio was transferred to Milan and served in Italy until 1580 when it was sent back to the Low Countries. For the next 10 years, the tercio took part to the campaigns in the Low Countries.

In 1590, the Tercio de Lombardia was renamed Tercio departamental de Flandes. Its headquarters were now in Malines (actual Mechelen). The same year, the tercio was sent to France to relieve Paris and support the Catholic League in its combat against the French protestants. The tercio then served in France until 1594 when it took its quarters in Namur. In 1595, it served in Flanders. In 1596, the tercio took part to the capture of Calais and then returned to Saint-Omer and operated in Flanders. It took its winter quarters in Ypres where it was reinforced with 8 companies from the disbanded tercio of don Martin Mejia. In 1597, the tercio saw action at Amiens (March 11) and wintered in Tournai and Saint-Amand. In 1598, it operated in the duchy of Cleves and in Westphalia. In 1599, it fought on the Meuse river and took its quarters at Namur. In 1600, it took part to the battle of Nieuwpoort (July 2) won by the Dutch army. The tercio then retreated towards Bruges with the Spanish army. From 1601 to 1604, the tercio took part to the siege of Ostend who finally capitulated on September 20 1604. In 1605 and 1606, the tercio operated on the Rhine.

In 1614, the tercio was part of the Spanish army who invaded the duchy of Jülich. In 1617, the tercio returned to Flanders and took its quarters in Malines.

In 1624, the tercio garrisoned the town of Essen and then took part to the siege of Breda who surrendered on June 5 1625. In 1626, it relieved Lingen and Grohl besieged by a Dutch army. From 1627 to 1635, the tercio served in the Low Countries. On January 1 1632, when the tercio was reviewed in Bruxelles, it counted only 1, 218 men divided up in 21 companies. In 1636, it was part of the army who invaded Picardie. In 1637, this army retired from France and returned to Flanders. In 1638, it initially garrisoned Hulst but retired to Beveren to prevent the enemy to penetrate into Brabant. On June 20 1638, it fought at the battle of Kallo. In 1640, the tercio tried to relieve Arras. In 1641, it was at Ayre. In 1642, it fought against the French at Honcourt. From 1643 to 1645, it served in Brabant. After the defeat of Rocroy, the tercio retired to Lorraine. In 1646, after the loss of Courtrai, the tercio retired to Brabant and finally took refuge under the guns of Bruges. In 1647, it took part to the reconquest of Armentiers, Landrecis and Dixmude. In 1648, it recaptured Courtrai and fought at the battle of Lens (August 20).

In 1649, the tercio joined the Spanish army concentrating in Cambrai which recapture Ypres. From 1650 to 1659 , it took part to the campaigns in Northern France.

In 1667, the tercio defended Fournes and capitulated with the honours of war. In 1668, after the peace, it garrisoned Maastricht.

In 1672, the tercio left Maastricht and joined a Dutch army which had crossed the Meuse river to fight the French and to besiege Charleroi. When the Allied army was forced to lift the siege, the tercio retired to its quarters in Maastricht. In 1673, it was forced to bandon the town who soon surrendered to a French army. From 1674 to 1678, the tercio served in Flanders against the French.

In 1683, when war broke out once more in Flanders, the tercio occupied Anvers which was finally captured by the French in 1684.

In 1689, the tercio joined a corps from Brandenburg and took part to the relief of Bossu besieged by the French. In 1690, it defended the lines of the Sambre river, took part to the battle of Fleurus (July 1) and, after the defeat, retired to Bruxelles. In 1691, it was sent to defend Mons who capitulated on April 10. In 1692, the tercio vainly tried to prevent the capture of Namur. In 1693, it was at the defeat of Neerwinden (July 29). In 1694, it recaptured Huy (September 28) and then marched to Bruxelles. In 1695, after the recapture of Namur, it was sent to this place as garrison.

At the beginning of the War of the Spanish Succession, in 1702, the tercio joined the French forces and besieged Kikuyt (unidentified location). In 1703, it took part to the sieges of Huy and Liepart (unidentified location) and was at the victory of Ekeren (June 30). In 1705, the tercio defended the lines of Brabant and covered the retreat when the Allies broke through these lines. In 1706, after the battle of Ramilies, the tercio defended Ghent and surrendered on May 28. The capitulation specified that the tercio could not participate to hostilities in the Low Countries for the rest of the war.

In 1713, the tercio returned to Spain and tooks its quarters in Benavente.

On June 16 1715, during the reorganisation of the Spanish army, the tercio was transformed into a regiment and took the name of Regimiento de Galicia. The same year, it was sent to the Basque country to contain agitation.

In 1732, the regiment defended Ceuta agianst a Moroccan force. In 1733, it served as garrison in Alicante and Oran.

On October 29 1734, the regiment was reorganised, its own troops formed its first battalion while the second battalion came from the disbanded Regimiento de Badajoz.

On December 26 1749, the regiment assumed garrison duty in Oran and defended the town against the Morrocans. In 1753, it was transferred to Barcelona and then to Valencia.

During the Seven Years' War, the regiment ranked 4th and was under the command of:

In 1792, the regiment was renamed Regimiento de la Reina, a name that it kept until 1810 when it was reverted to its previous designation of Galicia.

In 1762, the regiment was transferred from Valencia to Castile and the to Zamora. It was then ordered to join the Spanish army assembling for the invasion of Portugal under the command of the marquis de Sarria. The regiment formed the head of a brigade and was placed in the first line. It took part to the siege of Miranda which capitulated on May 10. For the rest of the campaign, the regiment made diversionary attacks, escorted convoys and finally reinforced the extremity of the Spanish positions. 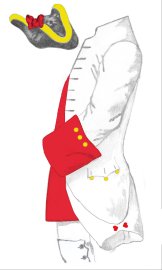 As per an État militaire, towards 1750 the coronela (colonel flag) of the regiment was white with a red Burgundian cross terminated in each corner by a medallion carrying the arms of Galicia (a golden chalice surrounded by 8 silver cross on a red field) surmounted by a golden crown. In the middle: the arms of Charles III surrounded by the necklace of the order of the Toison de Oro (Golden Fleece).

As per an État militaire, towards 1750 the batallonas (ordonnance flags) of the regiment were white with a red Burgundian cross terminated in each corner by a medallion carrying the arms of Galicia (a golden chalice surrounded by 8 silver cross on a red field) surmounted by a golden crown.