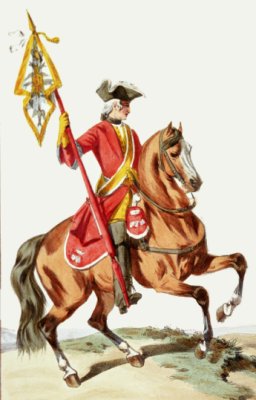 In 1667, when the English Parliament forced Charles II to get rid of the catholic officers and guards of his House, Count George Hamilton enlisted part of them and brought them to France. Louis XIV created a company of 200 gendarmes from them to remind of the suzerainty of France over England.

On November 27 1667, Louis XIV became captain of the company.

During the reign of Louis XIV, the Gendarmerie de France had fought in first line in all major engagements in Flanders, Germany and Italy.

During the Franco-Dutch War (1672-78), the Gendarmerie de France served in Flanders.

In 1733, at the outbreak of the War of the Polish Succession (1733-35), the Gendarmerie de France joined the Army of the Rhine. 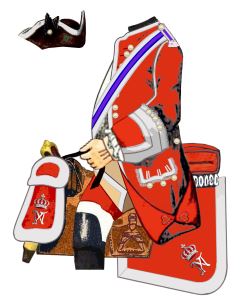 The silken standard (exceptionally called guidons in the Gendarmerie de France) had a white field heavily decorated with silver and gold embroideries, fringed in gold and silver; centre device consisting of a scene depicting 8 eaglets flying towards the sun with the motto “TUUS AD TE NOS VOCAT ARDOR”. As for all company standards of the Gendarmerie de France, the obverse and reverse were identical.