This company was raised for Marie Thérèse of Spain, queen of France, as per an edict issued at Fontainebleau on May 13 1661.

Until 1763 the headquarters of the Gendarmerie de France were at Châlons-sur-Marne while the company was quartered in Nivernais and Limagne.

During the Seven Years' War, the company was under the nominal command of Queen Marie Leczinka while a captain-lieutenant assumed effective command: 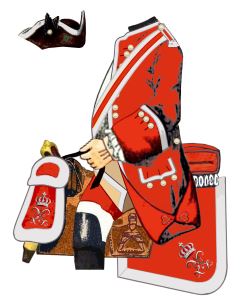 The silken standard (exceptionaly called guidons in the Gendarmerie de France) had a ponceau red field spangled with golden fleurs de lys; gold and silver fringe; centre device consisting of two cartouches side by side (one with the Arms of France, the other with the Arms of Poland) surmounted by a golden royal crown and surrounded by golden palm leaves tied up with a blue ribbon in its centre with the motto “SEU PACEM SEU BELLA GERO”. As for all company standards of the Gendarmerie de France, the obverse and reverse were identical.

Standards were carried on red tournament lances by troopers designated as porte-étendards (even though the standards of the Gendarmerie de France were called guidons).