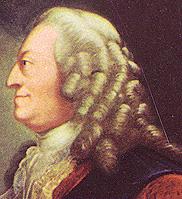 George Augustus was the only son of George I. He was raised as a German prince.

In 1706, George Augustus was created Earl of Cambridge.

In 1708, George Augustus fought bravely in the Battle of Oudenarde on July 11.

In 1714, George Augustus was already 31 years old when his father became King of Great Britain as George I. His relations with his father were not very good, the ill-treatment of the queen by George I being one of the most serious point of conflict.

In 1716, George I appointed George Augustus as guardian of the realm during his first journey to Hanover.

In 1717, the quarrel between the king and his successor reached a critical point when, on the choice of a godfather for the prince's son, George Augustus replied angrily to his father. The Prince was ordered into arrest and was subsequently commanded to leave St. James. After his exile from the court, the prince took up his residence at Leicester House and did everything in his power to support the opposition against his father's ministers.

In 1727, when George I died and George Augustus succeeded to the throne as George II, it was expected that Walpole, as one of the most important minister of the previous king, would be dismissed. However, the new king retained Walpole's services. George II allowed himself to be guided by the wise but unobtrusive counsels of his wife, Queen Caroline until her death in 1737. She often acted as regent when he was away in his Principality of Hanover. With Walpole, power was into the hands of the Whig aristocracy. An opposition gradually formed, regrouping Tories and discontented Whigs. Behind this opposition stood Bolingbroke, excluded from parliament but suggesting every party move.

In 1737 the opposition to Walpole's government received the support of Frederick, Prince of Wales. On November 10, Queen Caroline died.

In 1739, war broke out between Great Britain and Spain.

In 1741 the death of Emperor Charles VI brought on the War of the Austrian Succession. The position of George II as a Hanoverian prince drew him to the side of Maria Theresa through jealousy of the rising Prussian monarchy. Jealousy of France led Great Britain in the same direction, and in 1741 an important subsidy was voted to Maria Theresa. The king himself went to Germany to protect his principality of Hanover. To this end, he concluded a one year treaty of neutrality with France without consulting his British ministers. The subordination of the national interests to those of Hanover was not well received in Great Britain.

In 1742, Walpole was driven from office mostly because of his reluctance to actively support war operations against Spain. Lord Wilmington replaced him as nominal head of the ministry while Lord Carteret, one of his colleagues, attached himself specially to George II. Carteret tried to maintain himself in power by the king's special favour.

In the beginning of 1743 one French army was driven across the Rhine by the Austrians. Then, on June 27, another French army was defeated by George II in person at Dettingen. This was the last participation of a British king to a battle. The British Parliament increasingly opposed the preference shown by the king to Hanoverian interests.

In November 1744, Carteret (now Lord Granville) was driven from office. Henry Pelham, who had become prime minister in the preceding year, thus saw himself established in power. By the acceptance of this ministry, the king acknowledged that the function of choosing a ministry and directing a policy had passed from his hands.

In 1745, George II recalled Granville, but a few days were sufficient to convince him of the futility of his attempt. The events of the remainder of the reign of George II were not influenced by the king but rather by the parliament. This was the case for the resistance to the invasion of the Young Stuart Pretender in 1745, the Peace of Aix-la-Chapelle in 1748, the great war ministry of Pitt during the Seven Year's War. Indeed, George II did his best to exclude Pitt from office but to no avail.

In 1760, when George II died, he left behind him a settled understanding that the monarchy was one of the least of the forces by which the policy of the country was directed.