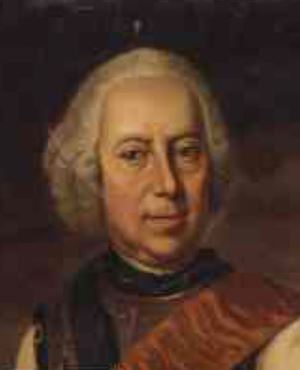 Friedrich Leopold was born on June 24 1688 in Schwägerau, East-Prussia, in a family of Swiss origin. His father was Konrad Ernst von Gessler auf Schwagerau, Prussian cavalry colonel and his mother Euphrosina von Rosenau.

In 1703, at the age of 15, Friedrich Leopold joined the Prussian Army where he first served at Königsberg (present-day Kalinigrad/Russia) in the Infantry Regiment Holstein.

Afterwards Gessler served approximately 10 years in the Austrian Army before returning to Prussia.

By January 30 1713, Gessler was already Rittmeister (captain) of a company of Regiment Pannewitz.

On January 21 1714, Gessler was promoted to major in Regiment du Portail (later on Dalwig).

On May 1 1720, Gessler was promoted to lieutenant-colonel.

On August 12 1721, Gessler was promoted to colonel in the Horse Grenadier Regiment Schulenburg.

On October 26 1735, Gessler was admitted in the Knights of St. John (Johanniter-Orden).

On May 17 1742, during the War of the Austrian Succession (1740-48), Gessler distinguished himself in the Battle of Chotusitz. A week later, on May 24 1742, Frederick II promoted Gessler to lieutenant-general and gave him the Cross of the Red-Eagle.

On June 4 1745, at the Battle of Hohenfriedeberg, Gessler commanded the Bayreuth Dragoons who completely routed 20 Austrian battalions, captured 67 flags, some guns and took 2,500 men prisoners. After this heroic action, Frederick raised Gessler to the title of count and gave him a coat of arms in memory of his heroism. This coat of arms contained two flags respectively showing the numbers 20 and 67 alluding to the number of battalions routed and to the number of 67 captured flags. After Hohenfriedeberg, Gessler at the head of 3,000 men followed the retreating Saxon Army of to the border of Upper Lusatia. Later on, he effected a junction with the army of the Duke of Dessau near Halle. In November, Gessler commanded the vanguard of the army marching towards Leipzig and Meissen. On December 15, at the battle of Kesselsdorf, he commanded the cavalry of the right wing. After the victory, he followed up the retreating enemies.

On May 26 1747, Gessler was promoted to General der Cavallerie (cavalry general).

On December 21 1751, Gessler was promoted to field-marshal with a special salary of 1,000 talers.

At the outbreak of the Seven Years' War, in 1756, Gessler took part in the Prussian invasion of Saxony. On October 1, at the Battle of Lobositz, he commanded the Prussian cavalry. The terrain was not suitable for cavalry attacks, but he managed to rout the Austrian Cordova Cuirassiers. Some books suggest that Frederick II criticized Gessler after the first attack and that the enraged Gessler led the next attack and was killed. This is obviously false.

In 1757, Gessler retired from active service due to his age.

On January 10 1758, Gessler retired from the Prussian Army with a pension. Major-General Johann Ernst von Schmettau replaced him as chef of the former Geßler Cuirassiers.

Count Gessler married Anna Eleonore Countess of Seeguth-Stanislawsky. Their domains were Wilhelmsdorf (present-day Sedzimierow/PL) and two others near Goldberg (present-day Zlotoryja/PL). The couple had 12 children. Three of his sons also served in the Prussian Army (Wilhelm Leopold August in his father's regiment).

Gessler died on August 22 1762 in Brieg (present-day Brzeg/PL). He was buried in the St. Nikolai Church.

In 1790, an epitaph was erected in the Church of St. Nikolai.