The regiment was raised in March 1689 by Alexander Count zu Dohna from troops contributed by various other regiments and garrison units.

Part of the regiment served in Germany in 1690.

In 1713, the regiment was merged with the garrison battalion of Pillau.

From 1721, the regiment was stationed at Königsberg where it served as garrison. Its recruiting cantons were in East Prussia and included most of the City of Königsberg as well as the towns of Angerburg, Barten, Lötzen and Rhein.

During the War of the Austrian Succession, in 1745, the regiment took part in the siege of Kosel.

The numbering system (Stammliste) was first used by Leopold I., Fürst von Anhalt-Dessau (Der alte Dessauer) in the Dessauer Spezifikation from 1737. Around 1780 the numbers were used in the printed Stammlisten, still with some variations for the fusilier regiments. It became official by "Cabinets-Ordre" from October 1, 1806. The present infantry regiment was attributed number 16.

In August 1756, the regiment was attached to Field-Marshal von Lehwaldt's Army stationed in East Prussia. It saw no action.

In 1757, the regiment was once more part of Lehwaldt's Army assigned to the defence of East Prussia against a Russian invasion. On August 30, at the Battle of Gross-Jägersdorf, it was deployed in the first line of the infantry left wing in Below's Brigade.

From January 10 to June 18, the regiment took part in the blockade of the Swedish fortress of Stralsund in Pomerania. On August 22, as Frederick II tried to put a stop to the Russian invasion of Brandenburg, the regiment formed part of a detachment, under the command of Kanitz, sent to Wriezen to bring back the small boats stored there to cross the Oder. On August 23, the detachment successfully brought back these boats. On August 25, the regiment fought at the Battle of Zorndorf where it formed part of the first line of the left division led by Kanitz. In this battle, it was routed and suffered heavy losses (21 officers and 611 men).

On July 23 1759, the regiment took part in the Battle of Paltzig where it was attached to Flemming's Brigade deployed in the second line of infantry. A few weeks later, on August 12, the regiment fought in the Battle of Kunersdorf where it was deployed in the second line of the left centre as part of Rebentisch's Brigade. In this bloody battle, it lost 16 officers and 550 men. With its recruiting cantons in East Prussia now occupied by the Russians, the regiment was reduced to a single battalion.

On November 3 1760, a battalion of the regiment took part in the Battle of Torgau where, as darkness was falling, it spearheaded the attack against the rear of the Austrians units occupying the Süptitz Heights.

On July 6 1762, during the campaign in Silesia, the regiment took part in the Combat of Adelsbach. On July 21, the regiment fought in the Battle of Burkersdorf where it was deployed on the left wing under Lieutenant-General Neuwied. It suffered heavy losses in this battle. From August 4 to October 11, it then participated in the siege and recapture of Schweidnitz. 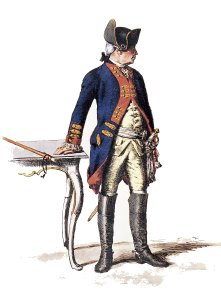 The uniforms of the drummers were similar to those of the privates but had much more elaborate lacing (a narrow drummer lace consisting of a white braid with a central black stripe bordered by two red stripes; a wide drummer lace consisting of a white white with a thick central red stripe bordered by two thin black stripes and two red stripes) and other peculiarities:

The pikes used as staffs for the colours were dark brown or black.