The tercio was created on April 22 1657 from the militia of Granada during the Portuguese Restoration War (1640–68) and seven companies were first reviewed at Benalcázar. The tercio (473 men) joined the army in Extremadura under the command of its “Maestre de Campo” Don Sebastian Graneros. The same year, the tercio took part in the defence of Valencia de Alcántara. The rest of the tercio marched from Granada and joined the men already stationed in Valencia de Alcántara. In 1658, the tercio went to Extremadura and took part in the siege of Olivenza. In 1659, it retired to Extremadura and then to Granada. In 1662, it took part in the siege and capture of Juromenha and in the conquest of Crato; in 1663, in the siege and capture of Evora and in the defeat of Ameixal; in 1665, in the disastrous battle of Montes Claros.

In 1674, during the Franco-Dutch War (1672–78), the tercio embarked at Málaga to reinforce the Army of Catalonia facing a French invasion and taking parft in the recapture of Maurellás and Ceret.

In 1689, during the Nine Years' War (1688–97), 300 men of the tercio were transported to Barcelona aboard a galley where they were later joined by the rst of the unit. It then went to Gerona from where detachments were sent to Palamós and Bascára. The reunited tercio then took part in the battle of Camprodon and in the relief of Melilla besieged by the Moors. In 1680. the tercio went from Málaga to Barcelona and then garrisoned Rosas. In 1694, it returned to Málaga and took part in the battle on the Ter and in the unsuccessful defences of Palamós and Gerona. In 1695, it started the campaign in Barcelona but returned to Granada. In 1696, it took part in the battle of Hostalrich and the retreated to Málaga and later to Granada. In 1697, the tercio assumed service aboard the galleys at Cartagena and Málaga. Its grenadiers took part in the unsuccessful defence of Barcelona.

In 1699, the tercio was sent to Gibraltar and was then transported to Ceuta which was threatened by the Moors. It then returned to Gibraltar.

In 1700, the tercio was sent back to Ceuta along with the Tercio de Burgos. In December, it re-embarked and sailed for Santa Maria.

In 1702, during the War of the Spanish Succession (1701–13 the tercio was initially stationed at Ceuta. In 1703, it defended Ceuta against the Moors. In 1704, it served in the campaign of Portugal, taking part in the capture of Salvatierra, Monsanto, Castelo Branco and Portalegre, and in the siege of Gibraltar. In 1705, it continued to participate in the unsuccessful siege of Gibraltar On July 14, the tercio was subdivided into two distinct units: the first retaining the name of “Tercio del Casco de Granada” and the second being named “Segundo Corpo de Granada” (soon renamed “Tercio de Santa Fé” in 1707). In 1706, the tercio took part in an attempt to relieve Jeréz de los Caballeros and in the defence of Requena where it had to surrender. In 1707, the old tercio became a regiment and renamed “Regimiento de Granada”. In June 1708, it was exchanged and sent to Cádiz to garrison the place. In 1709, the regiment was increased to two battalions. In 1710, it was transferred to Ceuta. In 1712, it returned to Málaga from where it provided garrisons to the Spanish places on the coast of North Africa. In 1713, the entire regiment assembled and was transported to Ceuta.

In 1714, the regiment was transferred to Cádiz. On June 1 1715, it incorporated the “Regimiento de Santa Fé” as its second battalion. In 1717, the regiment was sent to Extremadura where it remained until 1720.

In 1720, the regiment was sent to Andalusia to join the expeditionary corps destined for Africa under the command of Lieutenant-General Marquis de Lede. It then took part in the relief of Ceuta before returning to Spain.

In 1740, the second battalion of the regiment served aboard the fleet of General Rodrigo de Torres which sailed from Ferrol to relieve Cartagenas de Indias in America.

In 1741, during the War of the Austrian Succession, the first battalion of the regiment left for France where it took its winter-quarters in the foothills of the Alps. In 1742, a new second battalion was raised in Albuquerque. Meanwhile the first battalion operated in Savoy. In 1744, it passed the Alps and took part in the siege of Coni. In 1746, it campaigned in Lombardy and fought in the Battle of Piacenza before retiring to France. In 1748, at the end of the war, it returned to Spain and was stationed in Andalusia.

In 1757, the regiment assumed garrison duty in Cádiz.

In 1761, the regiment marched to Galicia. On December 4, the second battalion embarked at Ferrol and was transported to Santo Domingo on the Island of Hispaniola.

In 1762, the first battalion marched from Coruña to join the army assembling in Castile. It was attached to the Maceda's Division for the campaign of Portugal. It took part in the burning of Malasorda and in the siege of Almeida which surrendered on August 25. The battalion then formed part of the garrison of Almeida. On September 9, the first battalion rejoined the army. 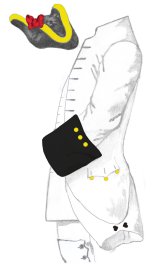 The coronela (colonel flag) of the regiment was white with a red Burgundian cross terminated in each corner by a medallion carrying the arms of the regiment (a pomegranate on a silver field) surmounted by a golden crown. In the middle: the arms of Charles III surrounded by the necklace of the order of the Toison de Oro (Golden Fleece).

The batallonas (ordonnance flags) of the regiment were white with a red Burgundian cross terminated in each corner by a medallion carrying the arms of the regiment (a pomegranate on a silver field) surmounted by a golden crown.