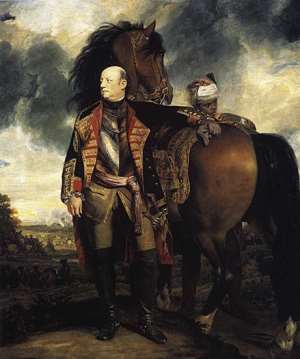 Painting of John Manners, Marquess of Granby in the uniform of the British Royal Horse Guards circa 1763 - Source: Wikimedia Commons

John Manners was the eldest son of the 3rd Duke of Rutland and Bridget Manners (née Sutton). He was educated at Eton and Trinity College in Cambridge. He was known by his father's subsidiary title: Marquess of Granby.

In 1741, Granby was returned as Member of Parliament for the family borough of Grantham.

At the beginning of the Jacobite Rebellion, John Manners received a commission as colonel of a regiment raised by the Duke of Rutland to assist in quelling this uprising. This regiment never got beyond Newcastle, but young Granby went to the front as a volunteer on the Duke of Cumberland's staff, and saw active service in the last stages of the insurrection.

In the last years of the War of the Austrian Succession, in 1747 and 1748, Granby served in Flanders under Cumberland.

In 1752, the Government suggested to George II that Granby be appointed colonel of the prestigious Royal Horse Guards (aka The Blues), in order to secure the parliamentary support of his family. However, the king refused to make the appointment.

In 1754, continuing to advance his parliamentary career, Granby was returned for Cambridgeshire. Though he despised faction in government, he allied himself with Viscount Royston, the other knight of the shire, a government Whig.

On May 27 1758, with the approval of the king, Granby was at last made colonel of the Royal Horse Guards. In the summer, Granby and his regiment were among the first British contingent (6,000 men) sent to reinforce the Allied Army of Ferdinand of Brunswick in Germany. The contingent embarked at Gravesend on July 19, disembarked at Emden on August 3 and arrived at Coesfeld on August 17, after marching through a very heavy rain.

In 1759, Granby was promoted lieutenant-general. During the Allied spring offensive in western Germany, on April 13, he took part in the Battle of Bergen where he seconded the Duke of Holstein who led the third column of the Allies. On August 1, Granby led the second line of the British cavalry. On September 6, Lord George Sackville, whose conduct at Minden had been severely questioned, left for Great Britain and the Marquess of Granby succeeded him as commander of the British troops in Germany.

In 1760, during the campaign in western Germany, on July 31, Granby led the British cavalry brigade detached from Ferdinand's Main Army at the Battle of Warburg. In this battle, Granby's cavalry, after two hours of trotting to reach the battlefield, finally managed to engage the French cavalry of de Muy's right wing. The pace was checked for a brief moment as the squadrons formed in two lines for the attack. Then the advance was resumed, Granby riding at the head of the Royal Horse Guards, his own regiment, and well in front of all. His hat flew from his head, revealing a bald head which shone conspicuous in the sun, as the trot grew into gallop and the lines came thundering on. The French squadrons wavered for a moment, and then, with the exception of the Bourbon brigade under the command of the Marquis de Lugeac, turned and fled without awaiting the shock. The British ranks promptly wheeled round upon the flank and rear of the French infantry; whereupon the six squadrons of the Bourbon cavalry brigade plunged gallantly down on the flank of the 1st King's Dragoon Guards, and overthrew them. But the Royal Horse Guards quickly came up to liberate their comrades. Lugeac's Brigade was beaten in two minutes and forced to withdraw in the greatest disorder. The French infantry, now attacked on both flanks, retired towards the Diemel. In December, Granby established his headquarters at Corvey near Höxter while his troops took their winter-quarters.

In 1762, Granby once more took active part in the campaign in western Germany. On June 24, in the Battle of Wilhelmsthal, he led a corps forming the left wing of the Allied Army towards Dörnberg. This corps almost succeeded in the encirclement of the French Army. On September 21, in the Combat of Amöneburg, his corps bore the brunt of the French assault.

In 1763, Granby returned to Great Britain as a hero. He sought to steer a path independent of party politics but supported the Treaty of Paris. He trusted George Grenville who, on May 14, appointed him Master-General of the Ordnance under his ministry.

On February 21 1764, Granby was also made Lord Lieutenant of Derbyshire.

In 1765, Granby spoke against the dismissal of army officers for voting against the government in Parliament. In May, Lord Halifax attempted to persuade George III to appoint Granby Commander-in-Chief of the Forces, in the hopes that his popularity would help quell the riot of the London silk weavers. The king refused, having promised the reversion of the post to the Duke of Cumberland, but obtained Granby's retention as Master-General of the Ordnance in the new Rockingham ministry.

On August 13 1766, under the Chatham Ministry, Granby was appointed commander-in-chief.

In 1768, despite rumours of his retirement, Granby vigorously electioneered and increased the Rutland interests seats to seven, at some expense.

In January 1770, the return of Chatham brought about Granby's departure from politics. Granby resigned as commander-in-chief and master-general of the ordnance, retaining only the colonelcy of the Royal Horse Guards.

This article borrows most of its texts for the period before 1758 and after 1762 to the Wikipedia article John Manners, Marquess of Granby, retrieved on December 27 2013