After the War of the Austrian Succession, the military forces of France were reduced. Several regiments and battalions were disbanded. However, the 48 grenadier companies of these disbanded units were maintained in active service. By the ordonnance of February 15, 1749, these grenadier companies were grouped into a single regiment, the “Grenadiers de France” in Arras. This gave birth to a quite peculiar formation. Indeed all colonels of the disbanded regiments, whose grenadiers had been incorporated into the Grenadiers de France, retained their rank in this new regiment. Thus, in 1756, the regiment counted some 24 colonels with some supernumeraries. They alternated at the head of the four brigades of the regiment, serving in this function only two months annually.

Recruitment was done as much as possible by voluntary enlistment among the grenadier companies of all French infantry regiments and among the Grenadiers Royaux. It was recommended to attract new recruits by stating the advantages of being part of this unit. Enlistment was for six years.

The regiment counted four brigades, each brigade consisted of 12 companies. In wartime, each company consisted of:

Furthermore, there was only one ensign per brigade carrying an ordonnance colour.

During the Seven Years' War, the regiment ranked 40th and was under the command of a general inspector:

In 1762, the regiment was renamed Corps des Grenadiers de France.

In 1757, the Grenadiers de France joined the Army of the Lower Rhine commanded by the Maréchal d'Estrées for the planned invasion of Hanover. At the end of April, the regiment was garrisoning Wesel. On May 16, it was ordered to move in second line in front of Dülmen. At the end of June, it was at the camp of Bielefeld with d'Estrées' Main Corps where, with the Grenadiers Royaux d'Aulans and Grenadiers Royaux de Modène, it formed the army reserve. On July 26, the Grenadiers de France were at the Battle of Hastenbeck, where they were placed on the left wing under Broglie. They attacked and occupied the village of Hastenbeck. After the victory, they encamped at Grosselsen near Hameln with the main body of the Army of the Lower Rhine from July 31 to August 2. On August 8, Richelieu, now commanding the army, sent the regiment along with three dragoon regiments ahead to occupy the City of Hanover. The regiment also participated in the capitulation of Klosterzeven and to the occupation of Hanover and Brunswick. At the end of the year, it took its winter-quarters in the second line of the French army at Hildesheim.

In February 1758, when Ferdinand of Brunswick launched his winter offensive in Western Germany, the regiment retired on the Rhine with the rest of the French army. From March 30 to April 4, it was in the reserve of Clermont's Army in the camp of Wesel on the Lower Rhine. In April, when Clermont redeployed his army along the Rhine, the regiment was placed in the third line at Linnich. After the successful crossing of the Rhine by Ferdinand's Army on May 31, the regiment retired towards Rheinberg where it joined Clermont's Army on June 2. It remained in this camp, where it was part of the reserve, until June 12. On June 23, the regiment took part in the Battle of Krefeld where it was part of the reserve. This reserve was finally sent to support Saint-Germain's Division but arrived too late and rather covered the retreat. In Mid August, after Ferdinand's retreat to the east bank of the Rhine, the regiment, as part of the Army of the Lower Rhine now under Contades, recrossed the Rhine to follow the Allied army. On August 20, it was encamped near Wesel where it formed part of the reserve. On September 12, the regiment advanced towards Hamm while 2,000 French infantry took post at Alten on the road to Lippstadt. On September 29, under Saint-Pern, it took part in the surprise attack on the camp of the Prince of Holstein at Bork. The same year, the Grenadiers de France also fought at Froweiler and Münster.

In June 1759, during the French offensive in Western Germany, the regiment was part of the Reserve under the command of Saint-Pern. On June 14, as part of Saint-Pern's Corps, the regiment took position between Fürstenberg and the main army. On June 24, the regiment took post on the Alme. On July 4, it was part of a corps who took position in front of the village of Schildesche, 3 km north of Bielefeld. On July 12, this corps replaced Broglie's Reserve at Enger. On July 15, the regiment was part of the force covering the main army encamped near Minden. On August 1, the regiment took part in the Battle of Minden where it was deployed at Todtenhausen in the first line of Broglie's Corps under the command of M. de Saint-Pern. The regiment suffered heavily from the fire of the Allied artillery. After this defeat, it retreated with the rest of the French army which evacuated Westphalia and Hesse. On August 10, closely followed in his retreat by Allied detachments, Contades formed 2 rearguard detachments near Dransfeld. The regiment was attached to the leftmost of these detachments, under the command of M. de Traisnel. On August 30, when the French main army took position between Bauerbach and Amöneburg, the regiment formed part of the Reserve.

By the end of January 1760, the regiment had taken its winter-quarters in the third line of the French Army along the Rhine and the Main from its mouth. By mid March, the regiment was billeted in Frankfurt, still in the third line. By May 23, it was part of the Grenadier Reserve of Broglie's Army, placed under the command of M. de Saint-Pern. On June 22, Broglie sent the regiment along with the Grenadiers Royaux to Nieder-Ohmen. In the evening of June 23, Broglie, leaving the main body at Grünberg, advanced northwards with all his light troops, the Grenadiers de France, 12 bns, the Royal-Carabiniers and his dragoons towards Schweinsberg on the Ohm in very bad weather conditions. On July 10, the regiment encamped at Berndorf. By July 14, it was part of the corps deployed between Mühlhausen and Berndorf to link the positions of Saint-Germain's Army with Broglie's Main Army. On July 31, Broglie ordered Saint-Pern to march towards Warburg with the Grenadiers de France, the Grenadiers Royaux and 8 pieces to reinforce de Muy. However, these reinforcements came too late, de Muy having already been defeated in the Battle of Warburg. On August 6, the Grenadier Reserve was placed at Rhoden between the main army and de Muy's Corps. On September 17, Broglie detached the regiment to support Prince Xavier encamped near Kassel. By September 19, the regiment was attached to Prince Xavier's Corps, forming part of the fourth line of his left column. On November 15, Broglie instructed M. de Saint-Pern, who was billeted on the left bank of the Werra, to dispatch 30 coys of Grenadiers de France and Grenadiers Royaux and 1,200 foot to M. de Rougé. By December 30, the regiment had taken its winter-quarters in Münden at the confluence of the Werra and Fulda.

On March 12, 1761, the regiment took part in a rearguard action near Duderstadt. On July 16, at the Battle of Vellinghausen, the regiment covered the retreat of Broglie's Army. 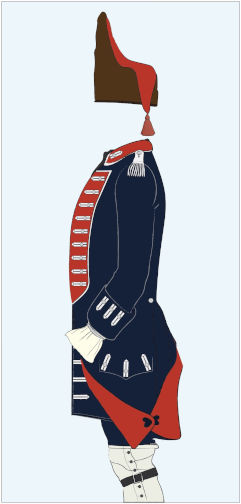 Armaments consisted of a musket with a bayonet and a sabre.

N.B.: in 1763, the distinctive colour of the uniform was changed to yellow.

The uniforms of officers had silver laces.

According to the Bouxwiller Inventory, the uniform of the drummers were similar to those of the privates with the following exceptions:

As aforementioned, the regiment had no colonel company and thus no colonel colour. This is clearly indicated by the Manuscript of 1757 which depicts only ordonnance colours.

Ordonnance colours: a white cross with the arms of France in its centre, the first and fourth cantons were white with 23 blue grenades with a red flame and the second and third cantons were blue with 23 golden fleurs de lys.

Jean-Louis Vial for additional information on colonels and colours